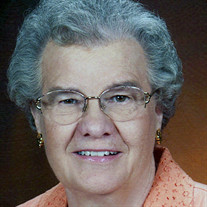 Funeral Services for Esther will be held on Wednesday, September 27, 2017 at 11:00 a.m. at the United Methodist Church in Shickley, Nebraska with Pastor Martin Leeper officiating. Visitation will be held on Tuesday, September 26, 2017 from 1:00 p.m. until 8:00 p.m. with the family greeting the public from 5:00 p.m. until 7:00 p.m. at Farmer & Son Funeral Home in Geneva, Nebraska. Graveside Services will be held in the Shickley Public Cemetery. Memorials are to be directed to the Shickley United Methodist Church. Esther Leon Anderson was born to George Alfred Smith and Edna Lorraine Ofield on May 1, 1929 at Minden, Nebraska, and passed away September 24, 2017 at Heritage Crossings in Geneva, Nebraska at the age of 88 years 4 months and 23 days. She was one of ten children in the family. Esther was married to E. L. Anderson of Shickley, Nebraska on December 23, 1950 and to them one child, Andy, was born. She still enjoys getting together with her sister and brother. Her parents were farmers, so she worked on the farm, graduating from Minden High School. She worked in a drug store in Minden for three or four years after her graduation. She met and married E.L. Anderson in 1950. They were blessed with one son, Andy Bruce, who lives in Omaha. She assisted him in the Anderson family business, usually helping with the bookkeeping and whatever else needed done. She recalls helping drive the truck to deliver pipe and other materials, which was something she needed to learn to do, especially when she had to make the trips by herself. She enjoyed working side by side with him. His business required traveling, so Esther would go along with him. They also took trips to visit their family in Oklahoma, California, Texas, and the surrounding states. E.L. died unexpectedly many years ago and Esther continued to live in their home in Shickley. Esther was always active in the Shickley community and especially enjoyed the things she did as a member of the Shickley Methodist Church. She was usually one of the ladies who served the Come On Over Coffees at Heritage over the years! Esther's hobbies have included doing ceramics, sewing, and she has always enjoyed reading. She always had a large garden and canned the produce. She took special pride in being able to take care of herself and her home after her husband died. Esther is survived by her son and daughter-in-law, Andy and Diane Anderson of Omaha, NE; brother and sister-in-law, Leroy and Rita Smith of Minden, NE; sister and brother-in-law, John and Elaine (Smith) Guilkey of Superior, NE; sister-in-law, Irma Smith of Santa Barbara, CA; brother-in-law, Gaylen Hanson of Minden, NE; sister-in-law, Sharon Smith of Norman, NE; brother-in-law, Earl Anderson of Shickley, NE and many nieces and nephews. She was preceded in death by her parents, George Alfred Smith and Edna Lorraine (Ofield) Smith of Norman, NE; husband, E. L. Anderson of Shickley, NE; brothers and sisters, Harold Smith of Carpenteria, CA; Stella (Smith) Schroer of Bellville, OH; Cecil and Doris (Smith) Johnson of Minden, NE; Dorothy Smith of Norman, NE; Jeanette (Smith) Hanson and Howard and Maxine (Smith) Albers of Minden, NE.

The family of Esther Leon Anderson created this Life Tributes page to make it easy to share your memories.

Funeral Services for Esther will be held on Wednesday, September...