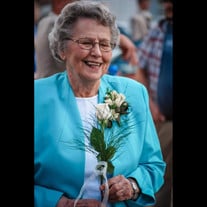 Evelyn Elznic was born December 1, 1923 to Clarence and Mary Hlina Madison near Burress, Nebraska. She passed away January 1, 2022 in Fairmont, Nebraska at the age of 98 years and 1 month. She attended school at District 21 in Burress. In 1943 the best thing happened - she married Clarence Elznic. To this union they were blessed with a daughter, Sheila, their pride and joy. They lived on the family farm south of Exeter all of their married life where they worked and farmed together until Clarence passed away on July 9, 1975. She remained on the farm until June of 1978 when she moved to Exeter. Throughout the years, she worked for the National Youth Administration in Fairbury, at Marsh Produce candling eggs, and in food service at the Exeter Public School. She also enjoyed working at the Maryland Café and the City Café. In addition, she worked in the office at Styskal Irrigation and for the last fourteen years before she retired at the Community Care Center of Exeter. Evelyn entered Country Reflections Assisted Living in Fairmont on February 15, 2015 and remained there until November 26, 2021 when she entered the Fairview Manor. Evelyn enjoyed spending time with her granddaughters and great grandchildren. She could also be found at the Exeter Senior Center, playing cards or bingo in her free time. She also liked bowling, traveling, and going to the casinos. Her family enjoyed playing cards with her and her homemade pies. Evelyn was preceded in death by her parents; husband Clarence; brother Leo; sister Effie Miller; half-sister Alice Peterson; half-brothers James and Frank Janda; and great grandson Seth McKay. Survivors include her daughter, Sheila (Don) Crays; grandchildren, Stephanie (Kirk) Jensen, Linda (Grant) McKay and Clara (Tim) Grace; great grandchildren Cody, Casey (Rileigh) and Jessica Jensen, Bailey McKay, Kane, Weston, Xavier and Blaze Grace; and many other relatives and friends. A Funeral Service for Evelyn was held on Thursday, January 6, 2022 at 10:30 a.m. at Farmer Funeral Home in Exeter, Nebraska. Kim Dunker presided over the Funeral Service. The recorded selections “Precious Memories,” “One Day At A Time,” and “How Great Thou Art” were played during the Funeral Service. Pallbearers for the Funeral included Cody Jensen, Casey Jensen, Bailey McKay, Joe Dinneen, Ben Horne, and Bob Becker. Honorary Pallbearers included Jessica Jensen, Kane Grace, Weston Grace, Xavier Grace, and Blaze Grace. A Graveside Service was held following the Funeral Service and Evelyn was placed in the Exeter Cemetery next to her husband, Clarence. Farmer & Son Funeral Home was in care of the arrangements and online condolences can be left at www.farmerandsonfuneralhome.com Memorials are suggested to the family.

Evelyn Elznic was born December 1, 1923 to Clarence and Mary Hlina Madison near Burress, Nebraska. She passed away January 1, 2022 in Fairmont, Nebraska at the age of 98 years and 1 month. She attended school at District 21 in Burress. In 1943... View Obituary & Service Information

The family of Evelyn Elznic created this Life Tributes page to make it easy to share your memories.

Send flowers to the Elznic family.