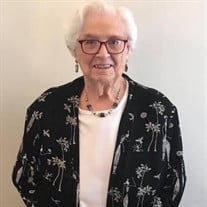 A Memorial Service for Evelyn was held on Thursday, July 1, 2021 at 11:00 a.m. at the Fairmont Community Church in Fairmont, Nebraska. Pastor Monica Magoola officiated the Service. Shirley Milton accompanied Ashten Smith in the singing of "He Touched Me, And Made Me Whole Again" and "How Great Thou Art." The special selection "Wind Beneath My Wings" was also played during the Service. Pallbearers for the service included Tyler Dewey, Evan Ronne, Colby Karr, Trent Karr, Rick Schmidt, and Kyle Schmidt. A private Graveside Service took place in the Geneva Public Cemetery prior to the Memorial Service. Memorials are suggested to the American Cancer Society or the American Diabetes Association. Evelyn Mae Luethke, of York, Nebraska, formerly of Fairmont, Nebraska, passed away on June 25, 2021 in Lincoln, Nebraska at the age of 96 years and 25 days. Evelyn was born on May 31, 1925 in Geneva, Nebraska to Clyde Ray & Mabel Leona (Crouch) Churchill. Evelyn was baptized and confirmed in the Methodist Church in Geneva in 1936. Evelyn married Dennis Albro on April 26, 1942, and two children were born to this union: Sharon & Pam. Dennis passed away in 1955. She then met Walter Luethke and they were married on August 22, 1956. They made their home on a farm north of Grafton on the Blue River. During the school years for the girls, Evelyn enjoyed teaching Sunday School, 4-H, sewing, cooking, and Brownie Scouts. After the girls were married, she enjoyed having and babysitting the grands. She made each grandchild a quilt and afgan, later sewing prom dresses and bridesmaid dresses for them. She enjoyed having friends over for meals and card games, and you missed a great time if you missed one of Evelyn’s catfish dinners. Evelyn was also a proud member of PEO, serving in several capacities in her chapter over the years. After Walter retired from farming, they enjoyed traveling with friends across the states and decided to move to Arizona in 1992. Walter passed away in 2005 and Evelyn remained in Arizona until 2014 when she decided to move to York to be closer to family as she continued to live on her own. She liked to be independent, enjoyed canning, and especially loved watching all the great and great great grandchildren while they came to visit. Evelyn was preceded in death by her parents; husbands Dennis Albro and Walter Luethke; brothers, Gerald Churchill and Everett Churchill; sisters, Doris Waltemade, Eleanor Starr, and Lila Benoit; daughter, Pam Karr Niemeyer; granddaughter Michelle Ronne; and grandson Scott Green. Evelyn is survived by her daughter, Sharon Mongan and husband Eugene Anderson of Fountain Hills, Arizona; grandchildren, Kristi & Kelly Bukaske of York, Nebraska, Ross Ronne of York, Nebraska, Vonda & David Tubbs of Marquette, Nebraska, Mike & Diane Karr of Blue Hill, Nebraska, Nicole & Jim Dietz of Grand Island, Nebraska, Dan & Mandy Karr of Aurora, Nebraska; 15 great grandchildren, 3 step great grandchildren, 1 great great grandchild, 4 step great great grandchildren; sister, Vivian Volkmer of Geneva, Nebraska; and nieces and nephews.

A Memorial Service for Evelyn was held on Thursday, July 1, 2021 at 11:00 a.m. at the Fairmont Community Church in Fairmont, Nebraska. Pastor Monica Magoola officiated the Service. Shirley Milton accompanied Ashten Smith in the singing of... View Obituary & Service Information

The family of Evelyn Mae Luethke created this Life Tributes page to make it easy to share your memories.

Send flowers to the Luethke family.