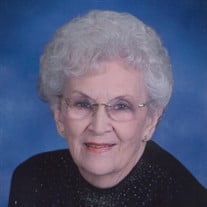 A Funeral Service for Evelyn was held on Monday, April 22, 2019, at the United Methodist Church in Geneva, Nebraska at 10:30 a.m., with Pastor Douglas Griger presiding. Organist, Melissa Houchin, accompanied the congregation as they sang three hymns, “Because He Lives”, “Ivory Palaces” and “In The Garden”. Pallbearers included Jennifer Kishkunas, Louis Kishkunas, Alicia Chavez, Jimmy Chavez, Andrea Seggerman, Nathan Seggerman, Shane Myers and Jill Myers. Honorary Pallbearers were Sarah Bishoff, Jeremy Bishoff, Melissa Reckewey, Joel Reckewey, Nathan Hughes, Ashley Hughes, Ryan Hedden, Ashley Hedden, Adam Hedden, Amber Hedden, Tanner Hedden and Mariah Hedden. Graveside Services were conducted following the funeral service at the Geneva Public Cemetery. Memorials were directed to the United Methodist Church. Farmer & Son Funeral Home was in charge of funeral arrangements. Evelyn Margaret (Persons) (Myers) Hughes was born December 1, 1922 in Archer, Nebraska to Harry Valentine Persons and Margaret Grace (Brown) Persons. She was one of three children. In January 2017, Evelyn entered Heritage Crossings in Geneva. She lived there until her death on April 18, 2019, surrounded by family. Evelyn attended grade school in Merrick County, and was a 1940 graduate of Central City High School. Following high school, she attended and graduated from Lincoln School of Commerce, and was first employed as a bookkeeper at Sears in Lincoln. Later, she worked as a secretary for the Department of Public Welfare in Lancaster County, and as a medical secretary at the Veterans Administration Hospital in Lincoln. She was united in marriage to Verle Edgar Myers on February 13, 1944 in Lincoln, Nebraska. In 1950, Verle and Evelyn moved to a farm northeast of Strang, where they started farming. In 1954, they moved about two miles west to the current homeplace. In 1983, they retired and moved to Geneva. To them, two sons were born; Delwin Verle in 1950 and Delton Doyle in 1954. Following Verle’s death, she was blessed with a wonderful second marriage on December 22, 1995 to Darrel Hughes of Geneva. Evelyn was excited to gain more family, especially more grandchildren and great-grandchildren. Evelyn’s life revolved around the farm, where she took an active part in the farming and livestock work. After moving from the farm to Geneva, she continued to help with farm activities whenever the chance presented itself. Even into her upper 80s, she couldn’t wait for a call to help move equipment from field to field, or a chance to deliver a meal during harvest. For many years, Evelyn was also the bookkeeper for 4M Farms. As a lifelong member of the Geneva United Methodist Church, Evelyn was active in the women’s circle. Evelyn loved her home and her family. She enjoyed her garden and flowers, and spent many hours in the yard and being outdoors. Sewing, counted cross stich and baking were other joys for Evelyn. She took pleasure in creating handwork and baked goods for friends and family. Her greatest love was her grandchildren. She and Darrel attended many of their activities. Evelyn was especially excited when she became a great-grandma times three. Evelyn was preceded in death by her husband, Verle; father, Harry Persons; mother, Margaret Persons; brother, Lynn Persons; sister, Jean Tyler; and step-son, Doug Hughes. She is survived by her husband, Darrel of Geneva; son, Delwin Myers and wife Sondra of Strang; son, Delton Myers of Geneva; and grandchildren, Jennifer Myers and husband Louis Kishkunas of Alexandria, Virginia; Alicia (Myers) Chavez and husband Jimmy of Olathe, Kansas; Andrea (Myers) Seggerman and husband Nathan of Hickman; and Shane Myers and wife Jill of Lincoln; great-grandchildren, Daniel and Jacob Seggerman, and Kate Kishkunas; step-son, Richard Hughes and wife Kay; step-daughter, Cheryl Hedden and husband Mitch; step-grandchildren, Sarah Bishoff and husband Jeremy; Melissa Reckewey and husband Joel; Nathan Hughes and wife Ashley; Ryan Hedden and wife Ashley; Adam Hedden and wife Amber; Tanner Hedden and wife Mariah; and Prescott Hughes; step-great-grandchildren, Chloe and Alexis Bishoff; Jonah and Lydia Reckewey; Camdyn Hughes; Hudson, Harrison and Hayes Hedden; Alexa Hedden; nieces, nephews and a host of friends.

A Funeral Service for Evelyn was held on Monday, April 22, 2019, at the United Methodist Church in Geneva, Nebraska at 10:30 a.m., with Pastor Douglas Griger presiding. Organist, Melissa Houchin, accompanied the congregation as they sang three... View Obituary & Service Information

The family of Evelyn M. (Myers) Hughes created this Life Tributes page to make it easy to share your memories.