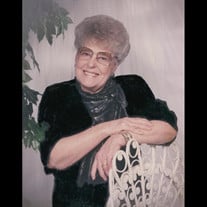 A Funeral Mass for Evelyn will be held on Friday, May 27, 2016 at 10:30 a.m. at St. Joseph Catholic Church in Geneva. Father Tom Walsh will officiate the service. Graveside services will follow the funeral and be held in the St. Joseph Catholic Church in Geneva. Visitation will be Thursday from 1:00 p.m. to 5:00 p.m. at Farmer & Son Funeral Home in Geneva. A Rosary will be prayed at 7:30 p.m. Thursday at the St. Joseph Catholic Church in Geneva. Evelyn Ann Kempkes Vavra was born to Henry N. Kempkes and Ann Kotmel Kempkes on July 26, 1921 at Crete, Nebraska and died May 22, 2016 at Fairview Manor, Fairmont, Nebraska. One of six children, she grew up as a farmer’s daughter in the Crete, Friend and Fairmont, Nebraska communities. She attended grade school at District 18 in Crete and District 100 in Friend. She completed her freshman year at Friend High School in 1934 and graduated from Fairmont High School with the class of 1938. On May 15, 1939, she married Leslie D.Vavra of Friend, Nebraska at St. Stephen’s Catholic Church in Exeter, Nebraska. To this union six children were born. A baby granddaughter, Paula, was taken into their home in 1963 after the accidental death of Paula’s mother, Barbara Corallo Vavra. Paula was raised and loved as the family’s seventh child. Evelyn loved children—especially, her grandchildren! She will not only be remembered by her family as a loving homemaker, mother and grandmother, but also as a C.C.D. & C.Y.O. teacher for the children of St. Stephen’s, Exeter and St. Joseph’s, Geneva parishes for many years. Evelyn was employed as a dental assistant for Dr. G. H. Liggett for 6 years. After moving to Geneva from their farm in Exeter in 1974 with her husband, Leslie and daughter, Paula, she was employed by the Fillmore County Hospital. She served as a Certified Nursing Assistant and Certified Social Services Designee for 13 years before retiring in 1986 to care for her husband who was suffering from Parkinson’s disease. In 1992, she once again worked as Social Service Designee at Fairview Manor in Fairmont, where Leslie then resided. Evelyn’s service to her community was extensive. She served as an officer on St. Stephen’s Altar Society for 6 years. During the periods when her four sons were serving their country (three in Vietnam) she was a member of the American Legion and V. F. W., serving as president of the American Legion Auxiliary in Exeter. After her own experience of caring for her ill husband, she was led in March of 1990 to form a support group for other family caregivers. With the help of others, she organized and coordinated, “Friends of Family Caregivers,” which proved very supportive for people caring for loved ones in their homes. During this time, she was also a member of the St. Joseph’s Catholic Church Council, serving 7 years on the Evangelization Committee. In addition, she volunteered in prison ministry and spent several years visiting and counseling youth at the Geneva Youth Development Center. Evelyn was preceded in death by her husband, Leslie D. Vavra; her parents, Henry N. Kempkes and Ann Kotmel Kempkes; her brothers, Franklin Kempkes, Carleton Kempkes and Henry Kempkes, Jr.; her sister, Darlene Kempkes Jowers; her brother-in-law, Leonard Swiercinsky; her sister-in-law, Jayne King Kempkes; her daughters-in-law, Barbara Corallo Vavra and Sherry Zimmerman Vavra; her son-in-law, Max Rhoads; her grandsons, Neal Christopher Koenig and Christopher D. Gooch; and great-grandchildren, twins, Megan & Bradley Koenig and Alexander Slechinger’s twin sister, Emily. Evelyn is survived by her three daughters: Connie Vavra Koenig and husband, Alfred of Brunswick, Maryland; Ann Vavra Gooch Rhoads of Goddard, Kansas; and Paula Vavra Anderson and husband, Darrell of Geneva, Nebraska; four sons: Jerry Vavra and wife, Marty of Gates, Oregon; Paul Vavra of Cheyenne, Wyoming; Michael Vavra and wife, Charlotte of Wichita, Kansas; and Joel Vavra and wife, Elaine of Crete, Nebraska; her sister, Kathryn Kempkes Swiercinsky of Savannah, Georgia; her sister-in-law, Marge Glazier Kempkes of Wichita, Kansas and her many grandchildren. During her lifetime, Evelyn took great pride and joy in her 21 grandchildren, 32 great-grandchildren and 2 great-great-grandchildren. Many times she remarked, “how richly blessed I am in grandchildren—I’m leaving my mark in descendants—there’s no doubt about it, I’ve been here!” Her final legacy for her descendants was the writing of her family history book, “Ninety Years of Life” in 2011. Her book has been donated to several Nebraska libraries.

A Funeral Mass for Evelyn will be held on Friday, May 27, 2016 at 10:30 a.m. at St. Joseph Catholic Church in Geneva. Father Tom Walsh will officiate the service. Graveside services will follow the funeral and be held in the St. Joseph Catholic... View Obituary & Service Information

The family of Evelyn A. Vavra created this Life Tributes page to make it easy to share your memories.