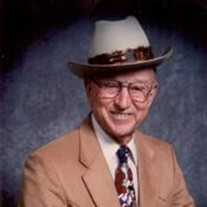 Federal R. Bridgman, age 92, of Fairmont died Sunday, Nov. 4, 2012 in Lincoln. He was born Feb. 6, 1920 to Chester and Nellie (Hooker) Bridgman in Fairmont. He married Charlotte Albro on June 14, 1941. Federal lived his first 87 years on the family farm near Fairmont that was homesteaded by his grandfather in 1876. When he began farming with his father in 1938 they changed from farming with horses to purchasing their first John Deere A tractor. He assumed all the farming in 1942 when his parents moved into town. He owes his start in farming to a 4-H feeder calf at age 9 and a 4-H Guernsey heifer calf at age 10. From that calf he built a dairy herd and ran a Grade A dairy farm until the 60’s when he began feeding cattle. He was a progressive farmer who began irrigating in the 50’s and received awards from Conservation Farm Families, Cattle Feeder’s and Young Farmer’s. Federal served his community through the Fillmore County Board of Supervisors, Fairmont Co-Op Board, and Fairmont Community Church. He also served as a Tabitha Hospice Volunteer, donated well over 10 gallons of blood, sang bass in the church choir for over 50 years and supported his family and friends in many ways. Federal lived an active life farming into his late 70’s, plus he learned to snow ski at 70 and play golf at 75. He also loved to sing, dance, play cards & dominos and spend time with his family. His grandchildren remember having fun with Grandpa including rides on the three wheeler, building a tree house, picking chokecherries and teaching them the joys of farming and cattle feeding. Federal loved fried chicken and cherry pie and requested that these be served at his funeral lunch. Survivors include his daughters and son-in-law, Janet Domeier of Lincoln, Jeanne & Dan Cuda of Lincoln; grandchildren, David & Teresa Domeier, Jan & Trudi Domeier, Jason & Kris Cuda, & Dawn Nelson; seven great grand children, two great-great grandchildren; and special friend, Marge Hesse. He was preceded in death by wife, Charlotte; grandchildren, Sheri Domeier & Bradley Cuda; brothers: Dwight, Frank, Lyman and Henry Bridgman; sister, Evelyn Armitage; and son-in-law, LeAlen Domeier. Funeral services for Federal were held on Thursday, November 8, 2012 at 10:30 a.m. at the Fairmont Community Church. Pastor Karla Sheffy officiated the service. Nancy Jo Galusha accompanied M. Annette Bridgman in the singing of “The Lord’s Prayer.” She also accompanied the congregation in the singing of “For All Saints,” “Hymn Of Promise,” and “How Great Thou Art.” Pallbearers for the service included Dave Domeier, Jan Domeier, Jason Cuda, Brad Cuda, Quentin Nelson, Marv Roper, and Alan Songster. Honorary bearers were Bill Cudaback and Howard Lefler. Interment was held in the Fairmont Public Cemetery. Farmer & Son Funeral Home was in charge of the arrangements. Memorials are directed to the Fairmont Community Church, Nebraska Special Olympics, and the Fillmore County Museum. To view pictures of Federal during his life go to http://youtu.be/LUnykW7w-Tw

The family of Federal R. Bridgman created this Life Tributes page to make it easy to share your memories.

Send flowers to the Bridgman family.