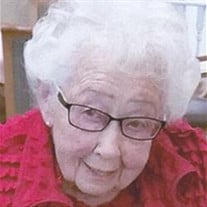 Funeral Services for Flossie will be held on Wednesday, July 12, 2017 at 2:00 p.m. at the First Congregational United Church of Christ in Geneva, Nebraska with Pastor Stuart Davis officiating. Visitation will be held on Tuesday, July 11, 2017 from 1:00 p.m. until 8:00 p.m. with the family present from 5:00 p.m. until 7:00 p.m. at Farmer & Son Funeral Home in Geneva. Graveside Services will be conducted at the Geneva Public Cemetery following the funeral service. Memorials are to be directed to the First Congregational United Church of Christ or to the family for a later designation. Florence R. "Flossie" Lefever was born December 26, 1921, at the family farm home in Madison Township, Fillmore County, Ne., to Harvey B. Garrett and Ida May Theobald Garrett. She passed away July 6, 2017, at Heritage Crossings in Geneva, at the age of 95 years, six months, and ten days. Florence joined siblings, Kathleen and Harlan. In 1927, a brother Richard was welcomed into the family; however, Ida May died two weeks after his birth leaving Kathleen to become the mother figure. Harvey, finding himself not able to care for a baby and the three older children, made the painful decision to allow Ida's sister, Tillie Theobald Brower and husband Harry to raise the baby. Growing up on the farm she enjoyed playing with many cousins in the area and from Wyoming and Iowa. She attended District 3 through the eighth grade and graduated from Geneva High School with the class of 1938. She belonged to the Congregational Church in Geneva for over 75 years. On June 9, 1940, she married Warren "Flunky" Lefever of Geneva in Shelby at the Evangelical United Brethren parsonage by the Rev. Plymesser. They lived with her father east of Geneva for the first year of their marriage until Warren's parents, John and Nora Lefever, and two of his siblings left Nebraska in 1941 to farm in Missouri and they moved west of Geneva. It was there that their family grew to include Ken, Jo Ann and Beth. She assisted Warren as a farm wife, loving every minute of that life. Her father remarried in 1944 and she became a daughter to Viola Bender Garrett. She belonged to the Congregational Women's Fellowship, taught Sunday School and served on the Geneva High School Alumni Association Directory Committee, later as chairman. She and Warren belonged to the Geneva Community Grange where she held many local and state offices. While Warren was Master of Grange he formed a committee which included themselves, Darrel and Jean Hughes and Guy and Lorene Brown to begin compiling a history of Fillmore County. The three couples traversed the county during the day gathering information and came together in the evenings to begin sorting what they had collected. Florence's cousin, UNL Professor Wilbur G. Gaffney, was the editor. All of their hard work over numerous years resulted in the blue book called "The Fillmore County Story.” She and Warren moved to Geneva in 1977 and they embraced town life. Warren died in 1995 leaving her alone, but she found joy in going to coffee downtown and later at Heritage, where she found a whole new family to love. She moved to Heritage Crossings Assisted Living in May 2014 and then to skilled care for the last eight months where she received loving care. She acquired nicknames, "Fossil" and "Flossie R-e-ebecca" by two special women in her life there. She loved to play cards and played in two groups at Heritage. Her family was the greatest joy of her life and when grandchildren and then great-grandchildren began arriving she was overjoyed. She greatly enjoyed attending activities of the grandchildren and great-grandchildren. She was lovingly called "Grammy," "Grammy Flo" or "Flobee." She formed many lasting friendships throughout her life and each was special to her. She is preceded in death by her husband, Warren; parents, step mother, sister, Kathleen (Jesse) Richards; brothers, Harlan (Margie) Garrett and Richard Brower; nephews, Robert Richards and Jesse Richards; brothers-in-law, John (Lena) Lefever, Wayne (Pat) Lefever and John Vance. Florence is survived by son, Ken, and wife Sandra; daughters, Jo Ann and husband John Edgecombe, all of Geneva; and Beth Lefever of Hastings; grandchildren, John Lefever of Lincoln, Nathan (Chelsey) Lefever of Geneva, and Daniel Lefever of Kansas City, Mo.; James (Michelle) Edgecombe of Minden, Michael (Abbe) Edgecombe of Hickman; Brent Hultine of Hastings and Aimee (Jeff) Schlegel of Lincoln; great-grandchildren, Olivia Lefever; Cooper, Hudson, Lawson and Piper Lefever; Grant and Benjamin Edgecombe; Lauren and Shaun Edgecombe, Anna, Katie, Luke and Riley Boonstra; Morgan Framke, and Nora, Elliot and Isaac Schlegel; sisters-in-law, Jean Vance of Levittown, Pa., and Dorothy Brower of Gering, many nieces, nephews, cousins and friends.

Funeral Services for Flossie will be held on Wednesday, July 12, 2017 at 2:00 p.m. at the First Congregational United Church of Christ in Geneva, Nebraska with Pastor Stuart Davis officiating. Visitation will be held on Tuesday, July 11, 2017... View Obituary & Service Information

The family of Florence "Flossie" R. Lefever created this Life Tributes page to make it easy to share your memories.

Funeral Services for Flossie will be held on Wednesday, July...

Send flowers to the Lefever family.