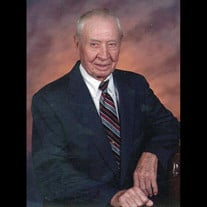 Forest Marvin Schrock was born to Pearl and John Schrock on March 6, 1921 on a farm near Davenport, Nebraska. He graduated from Shickley High School where he lettered in Basketball and Track. After graduation, he began his lifetime career in farming. Forest married Luree Peterman on June 12, 1945. The couple moved to Bruning, Nebraska where they farmed and raised two adopted children, Gary and Linda. Forest loved farming and tending to the crops. The pliers in his pockets would come out often to uncover a corn, milo or soybean seed to see just how close it was to popping through the soil. He planted many seeds in his life, which included seeds of wisdom, experience, friendship, kindness and helping others. He was active in church, community and school activities. He was on the school board for many years at Bruning Public Schools and served the Bruning United Methodist Church as a Trustee, as a member of Staff Parish Relations, United Methodist Men, and was always available to lend a hand with a project. Forest retired from farming in 2002 but continued an active interest in the grain markets, new products and farming methods. He loved harvest and even after retirement enjoyed returning to the farm to help where he could. In town, he assisted his neighbors in getting their mail, mowing the lawn and snow removal in the winter. Visitors to their home were always welcome and never left without a cup of coffee and a cookie to go with a dish of ice cream. He received the KOLN-KGIN TV station “Sunshine Award” after being nominated by his neighbors. In June of 2015, Forest and Luree celebrated their 70th Anniversary with an Open House and loved spending the afternoon with family and friends. Forest loved children. Many stories were told of carrying gum in his pocket for a special niece or nephews who spent time on the farm learning to drive the tractor and help with the field work. Forest always looked forward to the holidays when the family could be together and he could play with the little ones. They always brought him great joy, confirmed by the twinkle in his eye and his warm smile. Forest is survived by his wife, Luree Schrock; daughter Linda Young of Eagle; Grandsons Jeremy Swartz & wife Kandi of Fairbury, Timothy Schrock of McPherson, Kansas, Lance Swartz of Bruning; Sisters Inez McPeck of Lincoln and Opal Matejka of Strang; Great Grandchildren, nieces, nephews and many beloved friends. He was preceded in death by his parents, John and Pearl Schrock; brother Donald Schrock; and son, Gary Schrock. A Funeral Service for Forest was held on Wednesday, February 27, 2019 at 2:00 p.m. at the United Methodist Church in Bruning, Nebraska. Pastor Martin Leeper officiated the service. Jodi Meyer accompanied the congregation in the singing of “Amazing Grace” and “How Great Thou Art.” Pallbearers for the service include Ray Baldwin, Scott Schlegel, Leroy Rohr, Paul Williams, Kodey Swartz, and Zachary Swartz. Interment was held in the Shickley Public Cemetery following the Funeral Service.

Forest Marvin Schrock was born to Pearl and John Schrock on March 6, 1921 on a farm near Davenport, Nebraska. He graduated from Shickley High School where he lettered in Basketball and Track. After graduation, he began his lifetime career... View Obituary & Service Information

The family of Forest M. Schrock created this Life Tributes page to make it easy to share your memories.

Forest Marvin Schrock was born to Pearl and John Schrock on March...

Send flowers to the Schrock family.