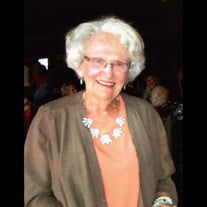 A Memorial Service for Frances was held on Friday, June 4, 2021 at 10:30 a.m. at the Exeter United Methodist Church. Pastor Murry Johnston officiated the Memorial Service. Shirley Milton accompanied the congregation in the singing of “Just As I Am.” She also accompanied Karen Filipi in the singing of “Just A Closer Walk With Thee.” Honorary pallbearers included Lane Becwar, Grant Becwar, Jake Becwar, Kaitlyn McGinnis, Nate Becwar, and Lauren Becwar. Frances' wishes were to donate her body to science and she will be cremated when they conclude studies and her ashes will be interred in the Exeter Cemetery in a private family ceremony at a later date. Memorials are suggested to the Exeter American Legion Auxiliary or the Exeter Fire and Rescue. Frances Mae Becwar was born to Frank J. and Helen M. (Novak) Hladky on May 11, 1926 at Pleasant Hill, Nebraska and passed away peacefully at her home on May 27, 2021 at Savannah Pines Retirement Community in Lincoln, Nebraska at the age of 95 years and 16 days. In her youth, Frances enjoyed riding horses and her pet dogs and cats. She attended rural school until the 8th grade. In 1944, she began working at the grocery store in Milligan, and she also took an interest in refinishing antique furniture and wood working. She also worked for a time at the Exeter Sundry and the Dime Store. It was also around this time that she met Ernie Becwar, and they were married June 6, 1944. After Ernie was discharged from the Army, they moved to the farm. Frances raised chickens, ducks, and helped Ernie pick corn, by hand, until they were able to afford a one-row picker. Frances and Ernie raised a family and had two sons: Larry and Jack. After the boys were older and entered into school, Frances worked part time at the Friend Dime Store. She also joined a country neighborhood extension club and Legion Auxiliary, which she was a 75 year member. In 1974, Ernie and Frances bought a lot and built a new home in Exeter. Upon moving into Exeter, they became members at the Exeter United Methodist Church and Frances was active in the UMW. Ernie & Frances enjoyed traveling, seeing all the states except the Northeastern states. Frances also did a lot of sewing in her spare time, she loved flowers, enjoyed ceramics, but she especially loved spending time with her grandkids. In 2018, Frances made the choice to sell her home in Exeter and move to Savannah Pines Retirement Community in Lincoln to be closer to family. Frances enjoyed the Savannah Pines community, and she tried to meet as many neighbors as she could, went to every event offered, and went on bus trips. She fit all of these activities in between her chemo treatments, infusions, and doctor’s appointments. A few things Frances loved in no particular order would include her family, her friends, a cold beer, shopping, clothes, traveling, flowers, rodeos, Alan Jackson, a full refrigerator, casino trips, polka music and just embracing life in general. Frances took an interest in everyone around her, she was kind, and she led a great life. Frances was preceded in death by her husband Ernie; parents Frank & Helen; and her sister Helen Kubicek. She is survived by her sons Larry & Nancy Becwar of Henderson, Nevada and Jack & Lori Becwar of Lincoln, Nebraska; grandchildren Lane & Paige Becwar, Grant & Amanda Becwar, Kaitlyn & Alex McGinnis, Jake Becwar and friend Brit, Nate Becwar and fiancé Marge, Lauren Becwar and fiancé Charlie; great grandchildren Harper & Rylee McGinnis and Krayten & Kysen Becwar.

A Memorial Service for Frances was held on Friday, June 4, 2021 at 10:30 a.m. at the Exeter United Methodist Church. Pastor Murry Johnston officiated the Memorial Service. Shirley Milton accompanied the congregation in the singing of &#8220;Just... View Obituary & Service Information

The family of Frances M. Becwar created this Life Tributes page to make it easy to share your memories.

Send flowers to the Becwar family.