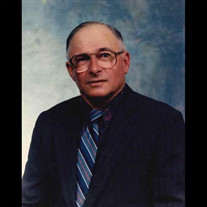 Francis Albert Biba was born to Albert Biba, Jr. and Bessie (Krejci) Biba on January 26, 1933 on the family farm near Exeter, Nebraska. He passed away on Sunday, December 27, 2020 at St. Elizabeth Regional Medical Center in Lincoln, Nebraska at the age of 87 years, 11 months, and 1 day. He was the only child born to this union. As a youth, Francis attended School District 33 through the 8th Grade. He then began helping his father on the family farm. In his younger years, Francis drove a Model A Ford and he often picked up his cousin, Carol, and enjoyed rides around the country. When he became of age, Francis joined the Army serving in the Korean War from 1953 to 1955. After being honorably discharged, Francis returned home from the service and joined his father on the family farm, continuing this vocation the rest of his life. Francis met Carol Casper and they were married on March 16, 1985. Francis and Carol made many great memories together. They enjoyed going out to eat together, trips to the casino, and gardening. He and Carol especially enjoyed sharing the produce from their garden with friends and family. Francis also enjoyed ‘hit and miss’ engines, ice fishing, and wood working. He lived a simple life, but took great pleasure in the farm life and his family. Francis was preceded in death by his parents Albert & Bessie; step-son Allen Casper and step-daughter Melody Paulsen. He is survived by his wife Carol; step-daughter Billie Casper, step-son Lyle Casper; 8 step grandchildren; and 7 step great grandchildren. A Funeral Service for Francis was held on Wednesday, December 30, 2020 at 10:30 a.m. at Farmer & Son Funeral Home – Kotas Chapel in Milligan, Nebraska. Kim Dunker officiated the Funeral Service. The recorded selections “On Eagle’s Wings” and “The Old Rugged Cross” were played during the Funeral Service. Pallbearers for the service included Ted Marek, Don Manning, Kent Manning, Pete Oldehoeft, Jason Oldehoeft, and Chad Oldehoeft. A Graveside Service with Military Honors was held in the Bohemian National Cemetery following the Funeral Service. Military Rites were performed by the Nebraska Military Honor Guard. Farmer & Son Funeral Home was in care of the arrangements and online condolences can be left at www.farmerandsonfuneralhome.com Memorials are suggested to the Exeter Rescue Squad.

The family of Francis A. Biba created this Life Tributes page to make it easy to share your memories.

Send flowers to the Biba family.