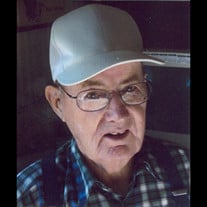 Francis Harvey Garrison was born to Franklin Fillmore and Alta Mae (Wood) Garrison on August 16, 1920 at Ohiowa, Nebraska and passed away on January 2, 2018 at the Fillmore County Hospital in Geneva, Nebraska at the age of 97 years, 4 months, and 17 days. The Garrison family resided in the community southeast of Ohiowa where he attended Franklin School District 10 for six grades before the family moved to a farm that later became their home, where he attended Pleasant Ridge District 9 for two years. He finished his schooling at Ohiowa High School and graduated with the class of 1937. Francis helped his folks and worked as a hired hand in the community and in Iowa where he picked corn several falls for friends he became acquainted with there. Several years later, he and his brother and friends went to Idaho in the falls to harvest beets and pick potatoes for friends they knew there. Francis was married to LaVern Bertha Wolfteich on February 8, 1942 at St. John’s Lutheran Church. They lived on the farm until Francis was drafted into the Army on September 25, 1942. He served over 3 years and 3 months in the southwest Pacific, hopping from Australia and various Islands and then to the Philippines when the war ended the day before his birthday. He was then trained as a Military Policeman and sent to Japan for the Army of Occupation for a time. During the process of rotation, which depended on the points you earned by the time in the service, he was ready to return to the U.S.A. He was told he would be home by Christmas, but he was delayed and finally discharged at Fort Logan, Colorado on December 31, 1945. He and several Nebraska buddies headed home on a train, dropping them each off along the way until he was the only one arriving in Lincoln at midnight as the whistles were blowing and the bells were ringing on New Year’s Eve. Francis and LaVern returned to the farm, which they eventually purchased. They enjoyed raising various crops and livestock and also LaVern’s flowers and garden. One son, Darrel, was born to them on May 9, 1947. Francis was active and served on Church Council, Township Board, Farmers Cooperative Board, and several other committees. He was a member of St. John’s Lutheran Church and Ohiowa American Legion Post 193. After some encouragement from Beth, Francis felt honored and thankful he got to go on the Honor Flight to Washington D.C. to see the World War II Memorial, the changing of the Guard at Arlington National Cemetery and other memorials around Washington D.C. Francis was also proud of his involvement with the demolition of the old Church and building of the new Church. He especially took a great deal of pride in using the glass from the old Church to make new windows for the new one. A group of members with Phyllis and Dick Schoenholz worked in the basement of their home to cut, grind, and weld the windows together to beautify the Sanctuary. LaVern passed away on August 23, 1987 and Francis continued farming but reduced his acreage by renting his quarter of farm ground out and farming one irrigated quarter of ground. In March of 1990, he retired from farming and had a farm sale and sold the remainder of his equipment. He continued to live on the farm helping others and helping Dick Schoenholz Auction Service for several years. Francis married Beth Wilson on June 21, 1992. They were blessed with 25 plus happy years together. They built a home together in Bruning where their door was always open for friends and family. They loved playing cards, and no one ever left without enjoying coffee and a plate of Francis’ famous chocolate chip cookies. When Francis married Beth, he was adopted by her 3 daughters and their families. They all loved him dearly. He was always looking for ways to help each of them, and his generosity also extended to people he didn’t know too. If someone needed help, he was there for them. He will be greatly missed by everyone close to him. Francis was preceded in death by his parents; first wife LaVern; son Darrel; brother Wayne Garrison; sisters Bernice Welton and husband Leland, Lois Dyer and husband Ernie and Evelyn Most. He is survived by his wife Beth Garrison of Bruning, Nebraska; daughters Paula and Duane Wyssman of Bellevue, Nebraska, Barbara and Jay Schoenholz and Lynne and Michael Houser all of Bruning, Nebraska; brother-in-law Verlin Most of Geneva, Nebraska; sister-in-law Janis Frenzen of Geneva, Nebraska; grandchildren Jenny and Ken Beukenhorst, Ami and Jeff Koehler, Brian and Julie Wyssman, Abby and Jarred Smith, Alissa and Brad Bankson, Ashley and Bryan Perez, Patrick Houser, Cody and Paige Houser, Mitchell Houser; and 18 great grandchildren; nieces, nephews, cousins and lots of friends. A Funeral Service for Francis was held on Friday, January 5, 2018 at 10:30 a.m. at the St. John’s Lutheran Church in Ohiowa. Pastor Judy Nuss, PMA Jim Germer, and CLM Jeanie Leeper officiated the service. Nancy Cradduck accompanied the congregation in the singing of “Precious Lord, Take My Hand” and she accompanied Gaylord Cradduck in the singing of “Just A Closer Walk With Thee.” Pallbearers for the service included Rick Duensing, Galen Niederklein, Robert Schropfer, Ronald Schropfer, Rex Mussman, and Gaylen Dunse. Honorary Pallbearers included Phillip Sears, Dick Schoenholz, Kenny Mussman, Tom Ortgies, and Louis Schropfer. Interment was held in the Ohiowa Public Cemetery with Military Honors performed by the Ohiowa American Legion Post 193. Farmer & Son Funeral Home conducted the services and online condolences can be left at www.farmerandsonfuneralhome.com. Memorials are suggested to the Lutheran World Hunger Appeal.

Francis Harvey Garrison was born to Franklin Fillmore and Alta Mae (Wood) Garrison on August 16, 1920 at Ohiowa, Nebraska and passed away on January 2, 2018 at the Fillmore County Hospital in Geneva, Nebraska at the age of 97 years, 4 months,... View Obituary & Service Information

The family of Francis H. Garrison created this Life Tributes page to make it easy to share your memories.

Francis Harvey Garrison was born to Franklin Fillmore and Alta...

Send flowers to the Garrison family.