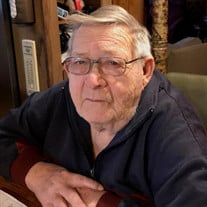 Francis William “Hub” Hurst was born to Harold and Helen Hurst in Fairmont on April 12, 1942. He passed away at the Fairview Manor on May 24, 2022, at the age of 80 years, 1 month, and 12 days. Hub was the only child in his family. He attended school in Fairmont and graduated with his high school diploma. While in school, Hub found a passion for music and joined The Esquires, which later became The Country Boys, and ultimately became Joe Daily and the Bottom Line. While in the band, Hub found enjoyment in playing the guitar and singing. Folks across Nebraska and even Kansas enjoyed their music for many years. Following graduation, after a few different jobs, he took the opportunity to work for the State of Nebraska for 40+ years, where he was awarded “Employee of the Year” on multiple occasions. Not long after he started with the State of Nebraska, Hub met his wife, Lyn, and they married in 1971. Last fall, they celebrated 50 years together. In 1971, Lyn had two children already, Melissa and Scott, then later came Ann to join the family. Hub and Lyn raised their family and spent their entire adult life in Fairmont. Hub was extremely devoted to his family, his career, and his community. He was always someone who was willing to lend a helping hand. He was a craftsman who loved spending time building things whether that was for additions on their house in Fairmont or creating fun gadgets and signs to be put on display in their house or garden. He was an incredible artist, musician, and always knew how to cheer you up with a joke. Throughout his life, Hub showed so much patience and kindness to the people around him. He was always very respectful and thoughtful. Hub was sure to make an impact on everyone he met and find a friend in the process. Whether he was browsing at the hardware store, cutting the grass, or hanging out on the front porch, he was always there to greet you with a smile and make you laugh. His caring and compassionate ways endeared him to all that came to know him. He was preceded in death by his parents Harold and Helen Hurst. He is survived by his wife, Lyn Hurst of Fairmont; his children, Melissa Hurst and David Zikmund of Lincoln, Scott and Kumiko Hurst of Elkhorn, Ann Hurst and Monther Al-Alwani of Fairmont; grandchildren, Andrew Hurst of Omaha, Ellie Hurst of Lincoln, and Alia Hurst of Lincoln. A Memorial Service for Hub was held on Tuesday, May 31, 2022 at 11:00 a.m. at the Trinity Lutheran Church in Grafton, Nebraska. Pastor Nick Mount presided over the Memorial Service. Cherie Domeier accompanied the congregation in the singing of “How Great Thou Art,” “A Mighty Fortress Is Our God,” and “Amazing Grace.” The recorded selections “Silver Wings” and “Chattanooga Sho Shine Boy” were also played as the processional and recessional songs. A private Committal of Ashes was held in the Fairmont Cemetery following the Memorial Service. Memorials are suggested to the York Adopt A Pet. Farmer & Son Funeral Home was in care of the arrangements and online condolences can be left at www.farmerandsonfuneralhome.com.

The family of Francis "Hub" Hurst created this Life Tributes page to make it easy to share your memories.

Send flowers to the Hurst family.