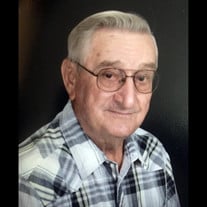 Francis Lawrence Reinsch was born to William & Margaret Ann (Erthum) Reinsch on July 12, 1929 in rural Fillmore County, Nebraska, and he passed away on December 21, 2017 at the age of 88 years, 5 months, and 9 days. He was one of 13 children in the family. Francis was married to Val Jean Steiger of Grafton, Nebraska on October 10, 1951, and to this union 4 daughters were born. Francis was born and raised in Fillmore County. He attended country school up to the 9th grade when he began working on the farm. He received his GED in November of 2001. Francis was drafted into the Marine Corp on November 14, 1951, and he served in the Korean War. He was honorably discharged on November 13, 1953. His time of service was a sense of pride to him and remained a part of who he was his entire life. When he returned to Fillmore County, he continued farming until 1994. He continued to be a part of the farm helping his son-in-law and grandson with farming. Francis and Val Jean lived on the family farm until 1981 when they bought a home on the north side of Geneva. He was baptized and confirmed into the Catholic faith at Turkey Creek. He loved farming and raising livestock. He also enjoyed working on derby cars. He was a member of the Samuel J. Marsh Geneva VFW Post 7012 and served as Post Commander from 1976-1978 and 1986-1987. He was also a member of the Shickley American Legion Post 164. Summers for Francis were consumed by visiting with family and friends and spending lots of time at the lake. He enjoyed teaching his grandkids how to ski while at the lake. Francis also loved working outdoors and trimming the trees. No tree was safe around Francis! He thoroughly enjoyed the holidays when the whole family would come home and spend time. Their home served as the gathering place for the entire family, and he loved watching the “Holiday Bowls” that took place in the yard. Francis was preceded in death by his parents, William & Maggie; sisters Viola Stengel, Gertrude Dondlinger, Marguerite Getz, and JoAnn Haufle; brothers Edward Reinsch, Clarence Reinsch, William Reinsch, Herbert Reinsch, and Wayne Reinsch; and great granddaughters Grace Moulton, and Arabella Runyon. He is survived by his wife, Val Jean of Geneva, Nebraska; daughters Donna Fogo & husband John of Clay Center, Nebraska, Vickie Runyon of Phillipsburg, Kansas, Janet Kempf & husband Mark of Shickley, Nebraska, Jacquie Moulton & husband Tom of Alma, Nebraska; sisters Patricia Bourke of Sutton, Nebraska and Jeanette Schommer of Lincoln, Nebraska; brother Merle Reinsch & wife Betty of Shickley, Nebraska; 16 grandchildren, 30 great grandchildren and 1 great great grandchild; and a host of family and friends. A Funeral Mass for Francis was held on Saturday, December 23, 2017 at 10:00 a.m., and A Rosary was prayed on Friday, December 22, 2017 at 7:00 p.m. all held at St. Joseph Catholic Church in Geneva. Father Scott Courtney was the Celebrant for the Mass & Rosary. Charlotte Bumgarner was the Cantor and Organist and she accompanied the congregation in the singing of “Abide With Me” and “The Strife Is “O’er.” She also accompanied David Claus in the singing of “How Great Thou Art,” “The Lord’s Prayer,” and “The Old Rugged Cross.” Pallbearers for the service included Mike Gowen, Jason Gowen, Oscar Runyon IV, Gunnery Sgt. Brendan Runyon, Jesse Kempf, Jered Kempf, Cody Kempf, Tim Moulton, and Steven Moulton. Honorary bearers were Don Labs, Joe Knoche, Tom Moulton, Paul Ogier, Richard Tonniges, Roger Olmstead, Mark Kempf, Charlie Barbur, and Treygan Gowen. Interment was held in the St. Joseph Catholic Cemetery. Military Rites were performed by the Samuel J. Marsh Geneva VFW Post 7102 and the Nebraska Marine Corp Honor Guard. Farmer & Son Funeral Home conducted the services and online condolences can be left at www.farmerandsonfuneralhome.com. Memorials are suggested to the family for future designation.

Francis Lawrence Reinsch was born to William & Margaret Ann (Erthum) Reinsch on July 12, 1929 in rural Fillmore County, Nebraska, and he passed away on December 21, 2017 at the age of 88 years, 5 months, and 9 days. He was one of 13 children... View Obituary & Service Information

The family of Francis L. Reinsch created this Life Tributes page to make it easy to share your memories.