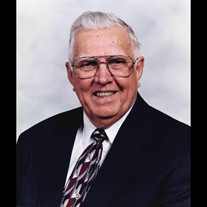 Frank L. Bruning was born to Fred H. Bruning Frieda C. (Bunting) Bruning in Bruning, Nebraska on April 21, 1926. He passed away on Monday, June 1, 2020 at Hebron, Nebraska at the age of 94 years, 1 month and 11 days. Other than the years he spent serving in the US Marines or on campus at the University of Nebraska, Frank has spent his entire life in Bruning. He attended school in Bruning, graduating from high school in 1943. Following high school, he studied at the University of Nebraska for one semester until he enlisted in the Marines and served in Guam for 14-months. Upon his discharge, Frank returned to the University of Nebraska where he majored in Animal Science. In 1949, he received a bachelor’s degree in agriculture. During his time there, he was instrumental in forming the rodeo club and was a member of the Alpha Tau Omega fraternity. He was honored with the Animal Science Block and Bridle award in 2002 and the Nebraska Cattlemen Silver Spur Award in 2001. He also felt strongly about and has donated to the UNL-Animal Science Department for the Teaching Chair that helps support the beef industry. In June of 1949, Frank married Mary Reiss. They started a registered Hereford herd in 1950. In 1975, he and his son, Fred, added registered Angus cattle to their operation. Besides farming and ranching, he had a passion for native grasses for use with livestock. In 2017, he received the first annual Lifetime Achievement NE Grazing Lands Coalition award. In 1961, Frank and Mary created a unique business, Feedlot Fencing Inc., which grew out of the innovative use of oilfield pipe and rods. This business provides steel rods and pipe, along with gates and panels that Feedlot Fencing manufactures for feedlots, ranches, dairies, buffalo and horse operations across the Midwest. In 1891, Frank’s grandfather started the Bruning Bank, which was originally called the German Bank. Frank became President of the bank in 1965 and was serving as Chairman of the Board Emeritus. He was an active member of the Nebraska Bankers Association and at one time served on the Nebraska-Kansas Schools of Banking. He and his wife were honored in 1998 with the Nebraska Bankers Association Agribusiness award for outstanding contributions to agriculture and Agri-business. He also was a member of the Independent Community Bankers and the American Bankers Association. In 1997, the American Bankers Association created an award to be given to an agriculture banker that proves to have strong dedication to rural ag banking. Frank was the recipient the first year of this award. The award each year given is named in honor of him, the Bruning Award. Throughout Frank’s life, he has been a creator of educational opportunities for both young and old. He helped start the Farmers and Ranchers College, which includes annual educational opportunities supported by agribusiness and the University of Nebraska Cooperative Extension. He was always a strong supporter of area 4-H and FFA program, the LEAD program, Thayer County Livestock Feeders Association, the Bruning Community Foundation and was an active member of the Trinity Lutheran Church in Bruning. Frank was preceded in death by his parents Fred H and Frieda Bruning, sister Marjorie and brother Herb and their spouses, Brother in law Dr. Walter E Reiss and son in law, Dr. Tom Tonniges. He is survived by his wife of almost 71 years Mary of Bruning, daughter Jane Tonniges of Omaha and son Fred D. Bruning (Penni) of Bruning. He is also survived by six grandchildren, Christopher (Lindsey) Tonniges, Emily Tonniges of Omaha and Elizabeth Tonniges (Jesse Bergman) of Lincoln, Adam (Carley) Bruning of Holdrege, Abby Bruning (Dr. Nick Branting) of Bend, OR and Reiss (Heather) Bruning of Bruning. He also enjoyed eight great-grandchildren. Alyssa, Rachel, Zac and Hallie Tonniges, Chloe and Elise Gomez, Annika and Lukas Branting. On Friday, June 5, 2020, a Funeral procession went past Frank’s favorite routes: the bank, the farm and the Bruning cow camp near Reynolds before concluding at the Trinity Lutheran Cemetery for a private Graveside Service with Military Honors provided by the Bruning American Legion Durham-Mammen Post 166 and the Marine Corp Honor Guard. Following the Graveside Service, a private Memorial Service was held at the Trinity Lutheran Church in Bruning. Pastor Stuart Sell and PMA Jim Germer officiated the services. Janice Fintel was the organist and Jamie Luttrell was the vocalist for the Memorial Service. Jamie sang “Precious Lord, Take My Hand” and “Softly and Tenderly.” Pallbearers for the service included to Adam Bruning, Reiss Bruning, Chris Tonniges, Zac Tonniges, Dr. Nick Branting, and Jesse Bergman. Farmer & Son Funeral Home was in care of the arrangements and online condolences can be left at www.farmerandsonfuneralhome.com Memorials are suggested to the Bruning Community Foundation, PO Box 100, Bruning, NE 68322.

The family of Frank L. Bruning created this Life Tributes page to make it easy to share your memories.