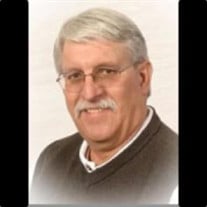 Frank Andrew Chapman was born March 15, 1950 in Lincoln, Nebraska to Archie (AD) and Delight Chapman. He passed away peacefully in Grand Island at St. Francis Medical Center on Tuesday, July 6, 2021 at 71 years of age. The oldest son, Frank grew up in the gym following his dad Archie in Sterling and Geneva to all the games, and seeing him win state basketball championships in 1957 and 1965. After a move while in high school, he graduated with the class of 1968 from Lexington High School. He was a four-year starter in football at center for his dad. On August 16, 1970, he was united in marriage to Gail Eich in Geneva. They graduated from Kearney State College and began long teaching careers with stops in Ruskin, Deshler, and Hampton. Two sons were born to this union, Anthony Ryan and Tyler Brett. They followed their dad everywhere — football fields, gyms and golf courses. One of their favorite trips together was to the Masters in 2001. Mr. Chapman — Coach — impacted many lives teaching history, geography and loads of kids how to drive in the summer. He was a passionate football and basketball coach who extended his classroom to the field and court. He led his teams in Hampton to the state football playoffs twice and in 1990 his girl’s basketball team won the state championship. He was a founding member of the Nebraska 8-Man Football Coaches Association and also active in the Nebraska Coaches Association. After he retired from teaching, he joined Ag and Home Realty as a salesperson. Later he transferred to Woods Brothers Realty in York. When Gail retired from teaching, she joined her husband as the team of the “Spouses Selling Houses.” They loved showing and selling houses and met clients who became lifelong friends. His other love was golf, which he passed on to his sons as well. After teaching driver’s education in the summer, he had a standing 4:40 tee time with his sons on an almost daily basis. He was a board member at the York Country Club for 25 years. Later in his life, he loved mowing the fairways at the club in the early morning dew. His classic half and half cut a personal favorite. For their 25th anniversary, Frank and Gail traveled to Pinehurst, North Carolina. They loved it so much that they returned a few years later to purchase a condo. They shared it with many family and friends. They enjoyed yearly trips where Frank explored all the area golf courses and Gail went with him to pick up pine cones and cross stitch. In 2004, his first granddaughter arrived. He became ‘Bampo’ to her and fondly became ‘Bampo’ to five more. He loved their visits and enjoyed following their activities. He softened some as he adjusted to the world of buttons and bows. Frank was preceded in death by his dad Archie; in-laws Keith and Mary Eich; sister-in-law Karen Janda; and brother-in-law Dan Collins. Left to carry on his legacy are his wife of 50 years, Gail of York; sons Tony (Kerry) of Grand Island and Tyler (Latisha) of Wichita, Kansas; granddaughters Addison, Olivia and Ella; Londyn, Sydney and Liberty; his mother Dee of Geneva; brothers Randy (Judy) of Lexington, and Paul of Lincoln; sister Nancy (Steve) Heiser of Lincoln; sister-in-law Janene Collins of St. Joseph, Missouri; along with many nieces and nephews. A Funeral Service for Frank was held on Friday, July 9, 2021 at 10:30 a.m. at First Congregational United Church of Christ in Geneva. Pastor Stuart Davis officiated the Funeral Service. Nancy Cradduck accompanied the congregation in the singing of “Here I Am Lord.” The recorded selections theme from “A Summer Place,” “What A Wonderful World” (recorded by Frank’s Niece Adrienne Toney), “After All These Years,” and The U.S. Open Theme Song “In Celebration Of Man” were also played during the Funeral Service. Pallbearers included Eric Allgood, Aaron Allgood, P.R. Farmer, Paul Meyer, Tom Densmore, and Myron Parsley. Interment was held in the Geneva Public Cemetery following the Funeral Service. Farmer & Son Funeral Home was in care of the arrangements and online condolences can be left at www.farmerandsonfuneralhome.com Memorials are suggested to the York County Club, GRACE Foundation in Grand Island, or the First Congregational United Church of Christ in Geneva.

The family of Frank A. Chapman created this Life Tributes page to make it easy to share your memories.