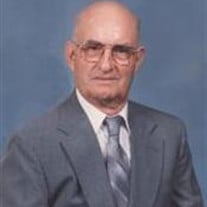 Services for Fritz will be held on Friday, August 26, 2011 at 2:00 p.m. at the Farmer & Son Funeral Home-Kotas Chapel in Milligan. Visitation will be on Thursday from 1:00 p.m. to 8:00 p.m. with family greeting friends from 6:00 p.m. to 8:00 p.m. Memorials are directed to the family. Frederick J. (Fritz) Kottas was born August 9, 1918 in rural Fillmore County to Fred and Vlasta (Kolar) Kottas. He died on August 24, 2011 at Tiffany Square in Grand Island at the age of 93 years, two weeks and one day. Fred graduated from Milligan High School in 1936 and worked in Milligan until enlisting in the U.S. Army Air Corps during WWII. He served in the U.S., England, France and Germany as a fighter plane mechanic during the war, and was part of the Normandy invasion. Following the war, Fred returned home and farmed near Milligan until he retired in 1993. While in the military, he married Angeline Novak on August 21, 1942. The couple had two children, Beverly and Brian. Fred was a devoted husband and father, and cared for Angeline during the years of her incapacity prior to her death in 2008. Fred was a patient and quiet man who loved his family and the land. He was a gifted mechanic and often repaired machinery for his brothers who farmed. He enjoyed going to school and sporting events for his children, grandchildren and great-grandchildren, and followed University of Nebraska sports closely. He was a member of the Milligan United Methodist church. Following Angeline’s death, he lived part of the time on his farm and the remainder of the time with his daughter, Beverly and her husband, Mike Nolan, at their home in Grand Island. He especially enjoyed the friendships he developed at the Grand Island Senior Center during the time he spent there. Frederick was preceded in death by his parents, wife Angeline, brothers Harry, Otto, Milo and Edward. He is survived by His daughter, Beverly Nolan and husband Mike of Grand Island, and son, Brian and wife Jeanne of Ceresco, four grandchildren, seven great-grandchildren, two sisters-in-law, Jarmila Kottas of Friend and Emily Betka of Beatrice, and many nieces and nephews.

The family of Frederick J. Kottas created this Life Tributes page to make it easy to share your memories.