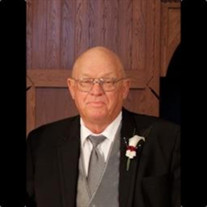 It was Gale's wish to be cremated and a Memorial Service will be held at 10:00 a.m., Saturday, December 5, 2020 at Trinity Lutheran Church in Cordova, Nebraska. Pastor Michele Kanzaki will officiate the Memorial Service. A private Graveside Committal of Ashes will take place at a later date in the Zastrow Cemetery, Cordova, Nebraska. A public visitation and book signing will take place on Friday, December 4, 2020 from 4:00 p.m. to 8:00 p.m. at Farmer Funeral Home in Exeter, Nebraska. Memorials are suggested to the Trinity Lutheran Church in Cordova or the University of Nebraska at Kearney. Due to Covid 19, we are restricted to 50% capacity for indoor funeral services. We will be observing all regulations pertaining to the Directed Health Measure. The service will be live-streamed to our public facebook page. You can find our facebook page by searching '@friendlyfuneraldirectors' or by searching 'Farmer & Son Funeral Home Facebook page'. Gale Thomsen was born to Fred & Anna (Due) Thomsen on April 29, 1942 on a farm 3 miles west of Cordova, Nebraska. He passed away on November 10, 2020 at Fairview Manor in Fairmont, Nebraska at the age of 78 years, 6 months, and 12 days. He was the youngest of 5 boys. Gale grew up on the family farm near Cordova, Nebraska. He graduated from Exeter High School with the class of 1960. He then entered into Fairbury Junior College graduating in 1962 and Kearney University graduating in 1967 with a teaching degree in History. Gale married Cynthia Wilken on April 4, 1963 and to them two boys were born: Tim and Neal. Gale and Cynthia raised the boys and farmed near Cordova. Gale was involved with the Cordova Boy Scouts, leading as his sons moved through the organization. He also enjoyed reading, watching sports and he had a keen interest in history, especially the Civil War and the Old West. Gale was preceded in death by his parents Fred & Anna; brothers Richard Thomsen, Roland Thomsen, and Warren Thomsen. Gale is survived by his wife Cynthia of Exeter, Nebraska; sons Tim Thomsen of Texarkana, Texas and Neal & Tara Thomsen of Palmyra, Nebraska; 3 grandchildren Mackenzie, Paxton and Bristol; great grandson AJ; brother Vernon & Grace Thomsen of Gretna, Nebraska; sister-in-law Lois Thomsen of Exeter, Nebraska; brother-In-law and sister-in-law Dan & Lana Wilken of Beatrice, Nebraska; and many nieces, nephews, cousins, and friends.

It was Gale's wish to be cremated and a Memorial Service will be held at 10:00 a.m., Saturday, December 5, 2020 at Trinity Lutheran Church in Cordova, Nebraska. Pastor Michele Kanzaki will officiate the Memorial Service. A private Graveside... View Obituary & Service Information

The family of Gale B. Thomsen created this Life Tributes page to make it easy to share your memories.

It was Gale&#39;s wish to be cremated and a Memorial Service will...