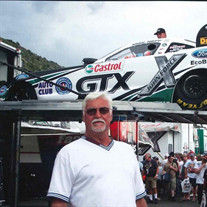 Gary Dean Filipi was born on January 27, 1952 to Lumir and Alice (Placek) Filipi in Crete, Nebraska. Gary was the oldest of 4 children. He married Judy Hromadka on December 12, 1968. Together they had 3 sons: Gene, Dan and Nate. Gary passed away after a hard-fought battle with cancer on February 7, 2021 at the age of 69 years and 11 days. Gary grew up on a farm north and east of Tobias. He attended Opossum Hill School through the 6th grade and then attended Milligan Public School, graduating in 1970. Gary was a standout athlete throughout high school, earning All State, All Tribland, the Cochnar Award and All Conference honors. His 31 rebounds in one game during his senior year, still holds a place in the NSAA records. He received a full ride scholarship to Hastings College to play football. Nicknamed “The Horse” at Hastings College, he continued his love for the sport receiving all conference awards. After graduating from Hastings College in 1974, he had the opportunity to continue playing football at the next level in the NFL. In 1976, he received an offer to be a teacher and head football coach at Shickley High School. Gary was honored to fill the position at Shickley....Milligan’s biggest rival. Gary’s teaching assignments included junior high health, all classes of physical education, and driver’s ed. Gary was head football coach from 1976 to 2001. Gary’s teams included competing in 11 man, 8 man, and 6 man divisions. During his coaching tenure, his teams qualified for many State Football Playoffs. He also coached basketball and the 1984 and 1987 boy’s basketball teams he coached qualified for the state tournament. He coached several post season all-star basketball and football teams. Coaching his sons in football had their moments, but they were also his most rewarding memories in all of his coaching career. Gary earned his 100th victory in basketball in 1988 and his 100th victory in football in 1993. In 1990, Gary was offered the head coach position for girl’s basketball. Having coached only boy’s basketball and football teams, he was up for the challenge. This was a new world for Gary, including tears, hairspray and bathroom stops during the trips home from away games. In 1991, Gary lead the Shickley girl’s basketball team to the state tournament finals earning runner up honors. This team had a special place in Gary’s heart. In 2001, Gary was honored through the Nebraska Coaching Association for 25 years of coaching. Gary retired from teaching in May of 2014 after 38 years at Shickley Public School. Everyone knew Gary for his green thumb and sprawling garden. He loved planting each season and even bought extra lots in Shickley to expand his gardens and to try his luck in planting fruit trees. During the summer, Gary could be found mowing lawns with Dawg, canning salsa and tomato juice, and stuffing peppers. You could find his produce at the Shickley Farmer’s market and Fillmore County Fair. Occasional trips to the NHRA races in Denver and trips to San Francisco to go sailing were always on the summer ‘To Do’ list. In 2016, Gary entered a new phase of life when his first granddaughter was born and he assumed the role of Grandpa Gary. He enjoyed attending recitals, grandparent’s day at school, babysitting, pictures on face time and communicating thru Skype. Teaching Reese how to plant a garden had high priority. It was pure satisfaction helping Reese pack the trunk full of pumpkins, apples and veggies from the fall harvest that she helped plant in the spring. In 2020, Gary along with his teammates from the 1970 Hastings College Football Team, would be inducted into the Hastings College Hall of Fame. Another proud moment for Gary in 2020 was locating and purchasing his dad’s 1952 Farmall M tractor that was sold on Lumir’s farm sale in 1990. He fought hard and strong over the enemy since last summer, in which he had little defense or offense against. There were no trick plays. A small victory was accomplished when he went into a short-term remission in November. Even though there was no turning back, he enjoyed one more anniversary, one more Christmas and one last birthday. Gary was preceded in death by his father, Lumir J. Filipi; Grandparents, Jerry and Emma Placek, Albert and Rosie Filipi; parents-in-law, Frank and Alma Hromadka; and daughter-in-law, Renee Filipi. Gary is survived by his wife of 52 years, Judy of Shickley; mother, Alice Filipi of Milligan; sons, Gene Filipi of Richmond, California, Dan Filipi and special friend Tiffany Ressetar of Highlands Ranch, Colorado and Nate Filipi and wife Amy of Lincoln, Nebraska; grandchildren, Reese and Palmer Filipi of Lincoln, Nebraska; brothers and wives, Larry and Deb Filipi, Loren and Bev Filipi all of Milligan, Nebraska; sister, Donna Wentworth and husband, Norm of Lincoln, Nebraska; sister-in-Law, Diane Jansky and husband Larry of Milligan, Nebraska; nephews and nieces, Troy Filipi and wife Amanda of Lincoln, Nebraska, Dustin Filipi and wife Carey of Columbus, Nebraska, Lindsay Filipi and fiancé Mike Densberger of Cortland, Nebraska, Amber Morrison and husband Brock of Bennet, Nebraska, Tyler Wentworth and special friend Stef Cerda of San Francisco, California, Kyle Wentworth of Lincoln, Nebraska, Jeff Jansky of Milligan, Nebraska, Shelley Domant of Lincoln, Nebraska, Jody Kercahl and husband Matt of Urbandale, Iowa; and many grand nephews and nieces, cousins and friends. A Funeral Service for Gary was held on Friday, February 12, 2021 at 1:00 p.m. at the United Methodist Church in Geneva, Nebraska. Kim Dunker officiated the Funeral Service. Stan Johnson accompanied the congregation in the singing of “I Believe” and “To Everything There Is A Season.” The recorded selection “Do You Believe In Magic” was played as the recessional. Pallbearers for the service included Dusty Filipi, Tyler Wentworth, Jeff Jansky, Paul Kassik, Wayne Flathman, Isaac Kamler, and Dan Sorge. Honorary Pallbearers included Reese Filipi, Palmer Filipi, Kyle Wentworth, Troy Filipi, Doug Straight, and Chris Dunker. Interment was held in the Atlanta Cemetery following the Funeral Service. Farmer & Son Funeral Home was in care of the arrangements and online condolences can be left at www.farmerandsonfuneralhome.com Memorials are suggested to the family and a scholarship will be established in Gary’s name.

Gary Dean Filipi was born on January 27, 1952 to Lumir and Alice (Placek) Filipi in Crete, Nebraska. Gary was the oldest of 4 children. He married Judy Hromadka on December 12, 1968. Together they had 3 sons: Gene, Dan and Nate. Gary passed... View Obituary & Service Information

The family of Gary Dean Filipi created this Life Tributes page to make it easy to share your memories.

Send flowers to the Filipi family.