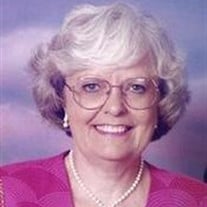 A public graveside committal of ashes was held on Wednesday, June 19, 2013 at 11:00 a.m. at the Geneva Public Cemetery. Gayle LuEllen Walton Fuller of Wilsonville, Oregon died June 7, 2013. She was born November 9, 1937 in Geneva, Nebraska to Gale and Helen Schwab Walton in the Geneva Hospital during a Nebraska blizzard, and came home wearing a white rabbit fur bunting made by her parents. She was an only child and the first girl born in the Walton family in seventy-one years. From an early age Gayle revealed an outgoing personality and a love of performing. When she was six, after studying baton twirling with great intensity, she became the drum majorette of the Geneva High School band. This position of leadership became a familiar one throughout her life. Piano lessons followed the baton lessons, and again Gayle studied with great intensity. When she was nine, her parents took her to a Shrine Circus performance in Hastings, Nebraska. This event had a profound effect upon her life. A great circus organist, Lillian Cole, captured Gayle’s attention. After the circus, Gayle met Lillian and, soon thereafter, Gayle went to Illinois to study organ with her. In the early 1950’s she had television shows in Lincoln, Omaha, and Hastings, Nebraska, and then performed for three summers in New York City with “Star Time Show” which showcased young performers. Numerous television and radio performances, and recording sessions in New York followed as Gayle gained a national reputation as a Hammond Organ artist. Following high school, she studied briefly at The Julliard School before pursuing a full-time career as an organist. Bookings for the next several years included a six month gig at the Fremont Hotel in Las Vegas, extended bookings at the Park Sheraton in New York City and The Tropics in Daytona Beach. She was also booked for two years of performances in Denmark, Norway, Sweden, and Finland before returning to the United States. Other performances included gigs with Lawrence Welk, Disneyland, and the Seattle World’s Fair. Closing out her organ performance career in Portland, Gayle met Jerry Fuller. They were married in 1963, and Gayle joined Jerry in his real estate business. Many years of real estate experience led Gayle to Barbara Sue Seal Properties which became Coldwell Banker Seal. Gayle had a stellar career as a relocation specialist and subsequently as the creator and administrator of “Quick Start”, a training program for new real estate licensees. Upon retirement she devoted countless hours to family genealogy, to writing her autobiography, and to a massive historical novel based on family histories. She was a member of the Belle Passie and Tualatin Chapters of the Daughters of the American Revolution, Toastmasters Club, Rose City Corvette Club, Tualatin Golf and Country Club, and the Conchologist Club. Her passions included music, golf, real estate, education, writing, learning, listening, Corvettes, sea shells, flow blue dishes, and Nebraska football. Gayle was an innovator, an artist, a teacher, a humanist, and a lover of positive thinking. Her magnetic personality drew people to her, and they never forgot her presence. Somewhere along the line, family members tagged her EZ Breezee. She is now speeding somewhere across the heavens in a shiny new Corvette creating boundless ideas for new projects and goals. She is preceded in death by her parents Helen and Gale Walton, husband Jerry Fuller in 1992, and an infant son. Surviving to remember Gayle’s grace, charm, kindness, and million dollar smile are her beloved nanny, Helen Riel Everts, step-daughter Debbie Fuller Anderson, many cousins, and countless friends. Should friends desire, contributions may be sent to Vital Life Foundation, in care of Marquis Care Wilsonville, 30900 SW Parkway Ave., Wilsonville, OR 97070 or Wounded Warrior Project P.O. Box 758517, Topeka, Kansas 66675 with form on-line.

The family of Gayle Walton Fuller created this Life Tributes page to make it easy to share your memories.

A public graveside committal of ashes was held on Wednesday,...

Send flowers to the Fuller family.