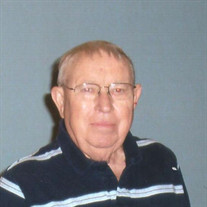 Gaylord Eugene Rachow was born to Samuel Rachow and Etta (Hinrichs) Rachow on Wednesday, December 21, 1927 on a farm near Carleton, Nebraska and passed away Friday, June 12, 2015 at Thayer County Hospital in Hebron, Nebraska at the age of 87 years. He was one of 3 children in the family. Gaylord grew up in the Carleton area. Gaylord started school at District #99 (Carleton School) and moved to Hebron in the 4th grade. He returned to Carleton in the 11th grade and graduated from Carleton High School in 1944. He spent one year in the Army in Korea. He helped build the first steel storage bin in Carleton, Nebraska and then worked for Urbauer Furniture Store in Davenport, Nebraska from 1952 to 1989. Gaylord moved to Davenport in 1964, and from 1989 until he retired in 2007, Gaylord was self-employed doing floor coverings and appliance services. Gaylord was very active in the Veteran's of Foreign Wars Post # 10579, Davenport, Nebraska and he was very devoted to his family and friends.... he was always there for them. Gaylord will be greatly missed and will always be in our hearts and in our precious memories. Gaylord was preceded in death by parents; sister, Birdene Nichols; brother, Robert Lee Rachow; brother-in-law, Harley Nichols; nephews, Robert Wade Rachow, Monte Nichols and Ryan Nichols. Gaylord is survived by sister-in-law, Blanche H. Rachow; nieces, nephews; great-nieces and great-nephews; many dear precious friends. No job too big or small for Gaylord and when he fixed something, it was fixed.......better than new! Gaylord was highly thought of by his family and many friends. Funeral services for Gaylord were held on Tuesday, June 16, 2015 at 10:30 a.m. at the Farmer & Son Funeral Home in Geneva. Kim Dunker officiated the services. The recorded selections “How Great Thou Art” and “Amazing Grace” were played during the service. Pallbearers for the service included Thomas Rachow, Ralph Baxa, Mike Blobaum, Matt Baxa, Dale Wittrock, and Kurtis Rachow. Interment was held in the Carleton City Cemetery with Military Rites performed by the Davenport Veteran’s of Foreign Wars Post 10579. Memorials are directed to the Veteran’s of Foreign Wars Post #10579 of Davenport.

Gaylord Eugene Rachow was born to Samuel Rachow and Etta (Hinrichs) Rachow on Wednesday, December 21, 1927 on a farm near Carleton, Nebraska and passed away Friday, June 12, 2015 at Thayer County Hospital in Hebron, Nebraska at the age of 87... View Obituary & Service Information

The family of Gaylord E. Rachow created this Life Tributes page to make it easy to share your memories.

Send flowers to the Rachow family.