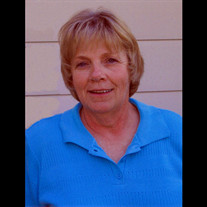 Georgann Scholes was born to Lollen & Kathleen Dorothy (Burt) Schoenholz on September 3, 1949 at Fairbury, Nebraska. She passed away on February 12, 2017 at York General Hearthstone in York, Nebraska at the age of 67 years, 5 months, and 9 days. She was the 4th of 7 children in the family. Georgann was baptized and confirmed in the United Methodist Church in Bruning, Nebraska. She grew up in the Bruning area where she attended Bruning Elementary and High School. In 1967, she was united in marriage to Darreld Domeier, and to this union they were blessed with 3 children: Wendy, Jill and Daniel. In 1981, she married Max Scholes of Council Grove, Kansas and added two sons to the family, Jim and Brett. While living in Council Grove, Georgann and Max ran the Star Mail Route, and she helped Max with his trucking company. Georgann also sold Mary Kay Cosmetics for many years. She enjoyed traveling around Kansas and Nebraska and meeting new people with her Mary Kay business. After Max’s death in 2006, she moved to Nebraska to be closer to her children and grandchildren. She began working for the Bruning-Davenport School District in Davenport. She then began working at the Bruning School until she could no longer work due to her Alzheimer’s disease. Anyone who knew Georgann knows how she loved to read. She always had a book in her hand, and she basically had her own personal library. She enjoyed watching the Nebraska Cornhuskers Football team and loved watching NASCAR, although she would only cheer for Dale Earnhardt Sr. and Jr. or anyone but Jeff Gordon. Georgann always enjoyed gardening, picking grapes and elderberries down by the creek and making her own jellies and attempting to make wine, which wasn’t always a success. She enjoyed traveling, usually to wherever her daughter, Wendy, was living. She also enjoyed long road trips with Frank and Charlene and trips with her sisters to the Burt family reunions. Georgann was preceded in death by her parents; brother Douglas; husband Max; son Brett; sister-in-law Wanda Schoenholz; and brother-in-law Frank Harding. She is survived by her children Wendy King and husband Warwick of Brisbane, Australia, Jill Brase and husband Jason of Davenport, Nebraska, Daniel Domeier and wife Andi of Bruning, Nebraska, Jim Scholes of Haven, Kansas; grandchildren Allison & Aidan King, Lynlee Linscomb, Kaitlyn & T.J. Krupicka, Dylan, Derek, & Peyton Domeier, Taylor & Brett Scholes; great Grandchildren Natalie & Cambrie Linscomb; brother, Rodney Schoenholz of York; sisters Charlene Harding of Omaha, Nebraska; Janine Hinzman of Tobias, Nebraska; Karen Mueller & husband Robert of Palmer, Kansas, Robin Kugel & husband Gary of Daykin, Nebraska; and many nieces, nephews, relatives and friends. A funeral service for Georgann was held on Thursday, February 16, 2017 at 10:30 a.m. at the Trinity Lutheran Church in Bruning, Nebraska with Pastor Stuart Sell officiating the service. Recorded music was played during the service and included “He Loved Us To Death,” “How Great Thou Art,” and “See You Again.” Pallbearers for the service included Allen Schoenholz, Jake Harding, Jesse Harding, Robert Mueller, Clay Hinzman, Lucas Hinzman, and Jarek Kugel. Interment was held in the Bruning Public Cemetery following the funeral service. Memorials are directed to the Alzheimer's Foundation of America, 322 Eighth Ave., 7th fl. New York, N.Y. 10001. Farmer & Son Funeral Home conducted the services. Online condolences can be left at www.farmerandsonfuneralhome.com.

Georgann Scholes was born to Lollen & Kathleen Dorothy (Burt) Schoenholz on September 3, 1949 at Fairbury, Nebraska. She passed away on February 12, 2017 at York General Hearthstone in York, Nebraska at the age of 67 years, 5 months, and 9... View Obituary & Service Information

The family of Georgann Scholes created this Life Tributes page to make it easy to share your memories.

Send flowers to the Scholes family.