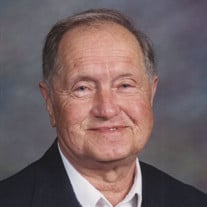 Funeral Services for George will be 2:00 p.m. Saturday, September 13, 2014, at the Farmer & Son Funeral Home in Geneva, Nebraska. Interment will be in the Geneva Public Cemetery. Visitation will begin Friday, September 12, 2014, at 1 pm. until 8 p.m. with family greeting friends from 5 - 8 at the Farmer & Son Funeral Home in Geneva. Memorials are in care of the family. M.Sgt. George Glenalan Bender (Ret.) was born to Joseph Leroy Bender and Mildred Jean McClintock Bender on June 17, 1931 in Geneva, NE. He passed away on September 10, 2014 at Midwest Covenant Home in Stromsburg, NE at the age of 83 years, 2 months and 23 days. He was one of 4 children in the family. George was born and raised in Geneva and graduated form Geneva High School. He enlisted in the United States Air Force on June 17, 1951. He retired from the military on July 31, 1976. During his career, he served in the Korean and Vietnam War. He was awarded the Bronze Star on July 2, 1967. During his years of service, he and his family lived in California, Colorado, and Nebraska. After his retirement, he worked as a Pinkerton Security guard at Sundstrand in York, NE. He continued to live in York until January 2013 when he moved to Midwest Covenant Home in Stromsburg where he resided until the time of his death. George was married to Kathleen O’Brien of Grafton, NE on February 22, 1952 and to them 3 children were born. George was a member of Salem Lutheran Church in Stromsburg. His hobbies included taking care of lawn and plants, dancing and fishing. He found joy in attending the activities of his grandchildren and great-grandchildren. George was preceded in death by his parents, Joseph and Mildred, his brother, Rodney, nephew, Kevin, sister-in-law, Mary Lou Koterzina, and his lifelong friend, Kathleen. He is survived by a sister, Joann (Gordon) Polak of York, a brother, Bob of Taylor, NE, daughter, Karen (Joe) Schinzel of Stromsburg, NE, son, William (Amy) Bender, Utica, daughter, Sara (Marty) Miller of Columbus. Four grandchildren and seven great-grandchildren, Jenny (Mike) Brown; Kole, Logan, and Scout of Columbus, NE; Jesse (Charissa) Johnson, Gavin and Carter of Lincoln, NE; Barb (Derek) Loseke, Caitlin and Addison of Omaha, NE, and Cody Bender of Utica, NE.

Funeral Services for George will be 2:00 p.m. Saturday, September 13, 2014, at the Farmer & Son Funeral Home in Geneva, Nebraska. Interment will be in the Geneva Public Cemetery. Visitation will begin Friday, September 12, 2014, at 1 pm. until... View Obituary & Service Information

The family of George G. Bender created this Life Tributes page to make it easy to share your memories.

Funeral Services for George will be 2:00 p.m. Saturday, September...

Send flowers to the Bender family.