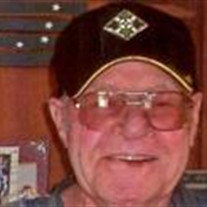 George L. Crabtree was born on November 15, 1924 to Dorothy M. Crabtree and Fred Heinburger in Wichita, Kansas. He passed away at his home in Geneva, Nebraska on February 19, 2012 at the age of 87. He was raised by his grandmother Georgia Crabtree on a dairy farm near Derby Kansas. After he finished school George joined the Marine Corp and was stationed at Camp Pendleton in San Diego California. When discharged from the Marine Corp George moved to Nebraska to work on a farm near Gresham. Once there he met Dorothy F. Rice. They were married on September 4, 1954 in York, Nebraska. They have eight children, Cheryl, Donna, Jimmy, Deborah, Steven, Richard, Lynn, and Joy. George worked on various farms in southeast Nebraska, drove a maintainer for York and Fillmore Counties, and retired from the University of Nebraska Research Center in Clay Center. He enjoyed fishing, playing the harmonica, accordion and organ. George was a gifted woods craftsman. He enjoyed putting puzzles together, playing with his grandchildren and watching westerns. George is survived by his wife Dorothy Crabtree, daughters and sons in laws, Cheryl Kay and Dan Perkins, Seward, Nebraska, Donna and Kenny Bressman, Savannah, Missouri, and Deborah Kieser, St. Joseph, Missouri. Sons, Jimmy Crabtree, Richard Crabtree, Lynn Crabtree, Geneva, Nebraska and Steven Crabtree, Columbus, Nebraska. He has 15 grandchildren, 14 great grandchildren and many nieces and nephews. He was preceded in death by both of his parents, brother, Pete Veers, sister, Betty Hopkins and daughter, Joy Lynette Crabtree. Memorial service for George L. Crabtree will be held at 11:00 a.m. at the Farmer & Son Funeral Home in Geneva, Nebraska on Friday, February 24, 2012. Private family graveside will be held at the Exeter Cemetery. There is no visitation and memorials are directed to the family.

George L. Crabtree was born on November 15, 1924 to Dorothy M. Crabtree and Fred Heinburger in Wichita, Kansas. He passed away at his home in Geneva, Nebraska on February 19, 2012 at the age of 87. He was raised by his grandmother Georgia... View Obituary & Service Information

The family of George Crabtree created this Life Tributes page to make it easy to share your memories.

Send flowers to the Crabtree family.