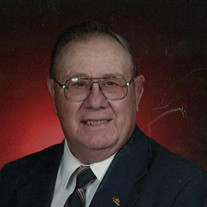 Funeral services for George will be held on Saturday, August 22, 2015 at 10:00 AM at the First Congregational United Church of Christ in Geneva with Pastor Diane Ryder officiating. Visitation will begin on Friday, August 21, 2015 from 1:00 PM until 8:00 PM with the family being present from 5:00 PM until 7:00 PM at Farmer and Son Funeral Home in Geneva. Memorials are to be directed to the family for a later designation. Graveside services will be conducted from the Geneva Public Cemetery. George Alexander Engle was born to Constantine (Alex) and Emma (Svehla) Engle on January 7, 1923 on the Svehla family farm near Exeter, NE and passed away on August 18, 2015 at Heritage Crossings in Geneva, NE at the age of 92 years 7 months and 11 days. He was the oldest of eight children in the family. George was raised on farms near Friend, Burress, Fairmont Airbase, and then 3 and a half miles east of Geneva, NE and was baptized September 19, 1923 at the home of his grandparents, Henry Engle. George became a member of the First Congregational Church on May 28, 1939. He attended country school District #85 and District #68 through the 8th grade and graduated from Geneva High School with the class of 1940. He started farming after graduation with his father who had started having failing health. George loved the farm life and also did custom bailing for 30+ years, custom combining, corn shelling, hauled cattle to Omaha to the Stockyards, sold cylinder bars, and wood shavings. George was united in marriage to Phyllis Jean Kotas of Milligan, NE on April 25, 1946 at the Catholic Church in Milligan, NE and resided on a farm Northeast of Geneva, NE. They had three children, Diane L., George A. "Jr", and Barbara L. George and Phyllis lived on that farm for 28 years, and on August 1, 1974 they purchased the First Congregational Church parsonage in Geneva, NE and together with Diane they moved into their newly remodeled home on December 28, 1974. After moving to town George continued driving to the country to raise crops, livestock and later years shared a large garden with Phyllis. George and Phyllis would bake pies and take them and their vegetables to the farmers market. He enjoyed his daily trips to the Geneva Senior Center to have coffee and social gathering with his friends to express his opinion on any given topic of the day and was very appreciative when someone would send a little something home with him for Phyllis and Diane. George enjoyed restoring antique machinery and would travel to St. Joe, MO. with his friend, Norman Gates, to sell their restorations to the Amish. George served his church on many board committees and as the Church Clerk. He also served on the ASC Board, Sutton Co-op Board, Farm Bureau Board, and the Pioneer Manor Board. George and Phyllis celebrated their 25th, 40th, and 50th, anniversaries in Milligan with Czech music provided by their friend Dean Hansen. At their 40th anniversary celebration there was a surprise mock wedding performed by their family. They enjoyed going dancing every Sunday evening at the Pla-Mor Ballroom where they ended up making many dancing friends from all over. George was preceded in death by his wife, Phyllis, of 69 years; parents Constantine and Emma Engle, brothers, Frank, Harold, and Willis Engle; sister, Anna Vnoucek; sisters-in-laws, Beth and Helen Engle; brothers-in-law, Ronald D. Uldrich, Donald Kotas, Frances (Fritz) Greenlee; niece, Debbie Wiltshire; nephews, Lawrence Engle, Herald Brian Wiltshire, Robert Kotas, and a great­ niece, Kristin Engle. George is survived by his son, George A. "Jr" and wife Susan, daughter, Diane L. Engle, and Barbara L. Trapp and husband Tom; sisters, Eleanor and husband Arlan Becker, Ruth and husband Delbert Sorge, and Mary L. Uldrich; brother-in-law, Joe A. Vnoucek; sisters-in-laws, Delmary Wiltshire, and Faye Greenlee; grandchildren, Loren Stephenson, Teresa and husband Herman Rodriguez, James and wife Jean Engle, Rueben and wife Lisa Engle, and Crystal Engle, 5 great­ grandchildren and a host of nieces, nephews, and friends.

Funeral services for George will be held on Saturday, August 22, 2015 at 10:00 AM at the First Congregational United Church of Christ in Geneva with Pastor Diane Ryder officiating. Visitation will begin on Friday, August 21, 2015 from 1:00... View Obituary & Service Information

The family of George A. Engle created this Life Tributes page to make it easy to share your memories.

Funeral services for George will be held on Saturday, August...

Send flowers to the Engle family.