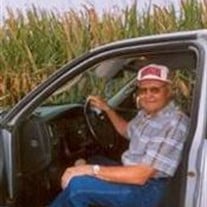 Services for George will be Monday, December 19, 2011 at 10:30 a.m. at the Fairmont Community Church in Fairmont, Nebraska. Interment will be in the Fairmont Public Cemetery. Visitation will begin Sunday at the Farmer & Son Funeral Home in Geneva from 1:00 until 8:00. Memorials to the Fairmont Community Church, Fairmont Senior Center or Fairmont Volunteer Fire Department. George Willard Thompson was born to Franzel Arno Thompson and Josephine Elizabeth (Schinzel) Thompson on November 3, 1928 at Longmont, Colorado, and passed away at York General Hearthstone in York, Nebraska on December 16, 2011 at the age of 83 years, 1 month, and 13 days. He was one of four children in the family. George spent his childhood with his parents and three sisters on farms around the Denver, Colorado area where his father was a truck gardener. It was here where George’s interest in farming began as a child when he worked along side the migrant workers in the vegetable fields. He remembers being called “Joe Wheeler” by the children of the migrant workers-that was their version of George Willard. He attended several country and town schools near Longmont, Fort Lupton, and Brighton, Colorado and attended high school in both Frederick and Longmont, Colorado. In the spring of 1943 at the age of 14, George came to Fairmont, Nebraska to live on the farm with his Aunt Emma and Uncle Leslie Miles, Sr. He finished high school at Fairmont Public Schools and graduated with the class of 1946. He helped his uncle Leslie Miles, Sr., and cousin Leslie Miles, Jr. farm and operate a dairy. On June 20, 1951, George was inducted into the U.S. Army during the Korean War. His four months of basic training were spent at Fort Knox, Kentucky in the 3rd Armored Division, Company C of the Medium Tank Battalion. He was then sent overseas to Trieste, Italy where he trained in the Italian Alps as tank commander of the 351st Infantry. George was honorably discharged on June 5, 1953. George returned to Fairmont and bought an acreage in the northwest part of Fairmont where he raised his children and later his 2 grandchildren. He was married to Donna Yvonne Hulse of Fairmont, Nebraska on March 25, 1956 at the Fairmont Federated Church and to them four children were born. He drove a school bus for several years and raised hogs, chicken and cattle. He farmed in and around the Fairmont area until his retirement in 1994. George owned and operated Thompson Land-Leveling Service for 40 years from 1958 to 1998. He primarily did soil conservation work for farmers, but also prepared building sites including the McDonald’s at the York, Nebraska interchange. He was a member of the Nebraska chapter of Land Improvement Contractors Association. George was baptized on April 6, 1941 at the First Christian Church in Brighton, Colorado. He joined the Fairmont Federated Church in 1947, and was active in the church services and was on many boards and committees. He also taught Sunday school and was a youth fellowship leader. He attended church regularly and especially enjoyed the adult Sunday school classes and Bible studies. George served on the Fairmont School Board, Farmer’s Co-Op Board of Directors, the local and county Senior Citizen’s Board, Fairmont Housing Authority, and was secretary and treasurer of the Fairmont Rural Fire Protection District for many years. He was also a member of the American Legion Lt. Forbes Post #21 of Fairmont. From 1999 to recent, George was the official Fairmont weather reporter for the U.S. Weather Service in Hastings. George enjoyed camping and eagerly looked forward every summer to the Thompson family reunions at Lake McConaughy and other sites in Nebraska or Colorado, and the Hulse family reunions at Yankton, South Dakota, plus the yearly trips to the San Juan Mountains in southwest Colorado. In his retirement years, George enjoyed playing cards at the local café and senior center. He did lots of reading and watching Fox News, and working in his woodworking shop. He also volunteered at the recycling center and delivered meals-on-wheels. George was preceded in death by his parents; infant daughter, Francine Kae; his Uncle Leslie and Aunt Emma Miles; stepmother, Esther (Johnston) Thompson; brothers-in-law, Charles Hulse and James Petroff; and sister-in-law, Beverly (Hulse) Ely. He is survived by wife, Donna of Fairmont; daughters, Georgia Kim Thompson and friend Dan Wall of Mancos, Colorado and Jennifer Jo Klipp and husband Leslie Klipp of York; son, Donavan Kelly Thompson of Fairmont; grandson, Scott Christopher Thompson of Hulbert, Oklahoma; granddaughter, Nicole Danae Thompson of Bellevue; sisters, Virginia and husband Earl Hultman of Sutton, Shirley Petroff of Longmont, Colorado, Lois and husband Myron Bertron of Frederick, Colorado; brothers-in-law, William Ely of Lincoln, Marvin and wife Corinne Hulse of York; sister-in-laws, Janice and husband Del Galusha of Fairmont, Judith and husband Rex Becker of Kingman, Arizona, Suzanne and husband Don Languis of Panama, Nebraska, Gloria and husband Jim Swartz of Marshall, Minnesota, Cynthia and husband Jon Rethwisch of Wayne, Crystal and husband Kevin Davis of York; several cousins, many nieces and nephews and friends.

Services for George will be Monday, December 19, 2011 at 10:30 a.m. at the Fairmont Community Church in Fairmont, Nebraska. Interment will be in the Fairmont Public Cemetery. Visitation will begin Sunday at the Farmer & Son Funeral Home in... View Obituary & Service Information

The family of George W. Thompson created this Life Tributes page to make it easy to share your memories.

Send flowers to the Thompson family.