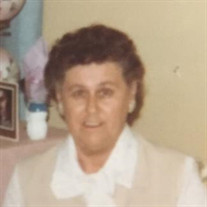 Funeral service for Georgiann will be 2:00 p.m. Tuesday, September 5, 2017 at the Farmer & Son Funeral Home - Kotas Chapel in Milligan, Nebraska. Visitation will be Tuesday from 12:00 noon until the service at the Funeral Home in Milligan. Graveside service will be in the Milligan North Cemetery following the service. Memorials are directed to the family. Georgiann Josephine Vohnout was born to Fred Kotas and Josie Marie Kotas (Hanus) on September 19th, 1926 at Milligan, NE on the farm, and passed away on August 30th, 2017, at her home on the farm in Milligan, NE at the age of 90. She was an only child. Georgiann was born and raised on her family farm ½ a mile north of Milligan, NE. She went to school at Milligan Public and graduated in 1944. She worked at the Kottas Drug Store where she served enough ice cream that for a long period of time she couldn't stomach the stuff. Shortly after she worked at the Fairmont and Brunning Air Base where she was a secretary who welcomed and helped deploy the troops during World War II. While there she met the most handsome man she had ever seen and ended up marrying John J. Vohnout on June 12th, 1948. On October 4th, 1965 they had their only son, John F. Vohnout. Instead of bringing flowers like the rest of the new dads, John brought Georgiann three stalks of milo to celebrate the birth of their son and his great crop that year! Georgiann and her husband lived in Lincoln for a short time before they came back to her family farm when her father fell ill and that is where they made their lives for forty-four years, until John's death in 1998. Afterward, Georgiann fell ill with many medical issues but, despite her problems her family and friends helped keep her strong for another nineteen years. During her life, Georgiann enjoyed the perks of farming with her husband, such as taking trips when and where they wanted to, going to many polka dances, and a “small” sideline of BINGO, casinos, and playing poker until the late hours of the morning with family. All the while never falling short of being a great mother, wife, and care taker of her mother. She was truly the least selfish person and always put the needs of her family and friends before her own. Her sense of humor and contagious laugh will so be missed by her son, his wife (the daughter that Georgiann always wanted but never had) and their three daughters. Georgiann was preceded in death by, Fred and Josie Kotas, father and mother, John J. Vohnout, husband all of Milligan, NE. She is survived by, John and Christine Vohnout, son and daughter-in-law of Hastings, NE; Stephanie Ann, Tiffany Jo, and Georgie Marie, granddaughters of Hastings, NE; Liam Alexander, great-grandson of Hastings; Mamie Gordon, sister-in-law of Lincoln, NE; and many nieces and nephews.

Funeral service for Georgiann will be 2:00 p.m. Tuesday, September 5, 2017 at the Farmer & Son Funeral Home - Kotas Chapel in Milligan, Nebraska. Visitation will be Tuesday from 12:00 noon until the service at the Funeral Home in Milligan. Graveside... View Obituary & Service Information

The family of Georgiann J. Vohnout created this Life Tributes page to make it easy to share your memories.

Funeral service for Georgiann will be 2:00 p.m. Tuesday, September...

Send flowers to the Vohnout family.