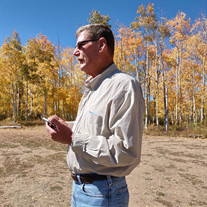 Gerald Lee Kerl was born in Hebron, Nebraska to Tom Kerl and Lucy (Babka) Kerl of Bruning, Nebraska on October 27, 1955. He passed away at his home on Monday, December 10, 2019 at the age of 64 years, 1 month and 14 days. He was baptized and confirmed at the Trinity Lutheran Church in Bruning. He graduated from Bruning Highschool in 1974 where he enjoyed football, basketball and track. After high school, he attended Nebraska Wesleyan University. After settling in Geneva, Nebraska, he worked for the city for 23 years. Gerald held the title of Water Operator, but his coworkers will tell you that he wore many hats. He was in charge of water systems, and he also helped with the management of waste water systems. He was instrumental in the operation of the Geneva Aquatic center, a helping hand at the Geneva Public Cemetery, and of course, the town dog-catcher. A large part of his life was dedicated to his friends, his family and to nature. Gerald was preceded in death by his mother, Lucy. He is survived by his father, Tom Kerl; his wife of 29 years, Susan; his brother, Gordon Kerl and wife Joan of Bruning; his sister, Shari Nigro and husband Joe of Lincoln; and his three children: Wade, Faith and Zackary; as well as his nieces and nephews, brothers-in-law and sisters-in-law, Bill and Mary Burgess of Geneva, and Nita and Van Johnson of Orlando. Gerald had a great respect for wildlife and its habitat. He was known to house everything from wild raccoons to a red falcon that he caught as a young child. He felt great appreciation and respect towards his mother for allowing him to do so. As an avid outdoorsman, he loved to hunt, fish and spend time observing mother nature’s wonders. While seemingly taken early in life, he will be remembered for his commitment to his community and family, his passion for nurturing his garden and food-plot, and for his easy-going disposition. It is anticipated that he is presently reunited with his best four-legged friends: Buck and Boone, and his fun-loving cousin, Billy Babka, throwing back a “cold one.” He is and was a good man. A Memorial Service for Gerald was held on Saturday, December 14, 2019 at 10:00 a.m. at the Trinity Lutheran Church in Bruning, Nebraska. Pastor Stuart Sell officiated the Service. Janice Fintel accompanied Faith Kerl in the singing of “Angel.” She also accompanied the congregation in the singing of “Softly & Tenderly” and “How Great Thou Art.” Honorary pallbearers for the service included Wade Kerl, Zackary Kerl, Gordon Kerl, Joe Nigro, Kim Schoenholz, Tom Hawks, Bill Burgess, and Brent Kassik. Gerald’s ashes will be scattered at his favorite family hunting spot at a later date. Farmer & Son Funeral Home was in care of the arrangements and online condolences can be left at www.farmerandsonfuneralhome.com. Memorials are suggested to the family for future designation.

Gerald Lee Kerl was born in Hebron, Nebraska to Tom Kerl and Lucy (Babka) Kerl of Bruning, Nebraska on October 27, 1955. He passed away at his home on Monday, December 10, 2019 at the age of 64 years, 1 month and 14 days. He was baptized... View Obituary & Service Information

The family of Gerald L. Kerl created this Life Tributes page to make it easy to share your memories.

Gerald Lee Kerl was born in Hebron, Nebraska to Tom Kerl and...

Send flowers to the Kerl family.