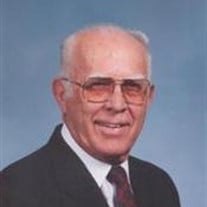 Gerald (Jerry) Clarence Krause was born May 26, 1931 on a farm northwest of Shickley, Nebraska to Clarence and Joyce (Ogg) Krause. He was the oldest of three children born into the family. He passed away on Sunday, July 31, 2011 at Fairview Manor in Fairmont, NE at the age of 80 years, 2 months and 5 days. He was raised on the farm and attended a near by country school. He completed 7th grade and passed the 8th grade exam. He then moved to Geneva with his grandparents Albert and Emma Krause so he could attend high school. He graduated from Geneva High School with the class of 1947 at the age of fifteen. Jerry was baptized and confirmed into the Shickley United Methodist Church where he served on a variety of committees throughout the years. In 2000, he transferred his membership to the Geneva United Methodist Church. After graduation he moved back to Shickley and went to work for Alfs Well Drilling Co where he worked for 47 years. He also worked for Lichti Bros for 3 years. He attended many classes and became a certified well driller in both Nebraska and Kansas. Jerry was a hard worker and became friends with many farmers in the area. He was a member of the Shickley Fire Department for 25 years and also served on the town board for 8 years. Jerry was united in marriage to Shirley Ann Jansen September 17, 1953 at the Congregational Church in Exeter. They resided in Shickley where they raised four children: Vicki, Connie, Marc, and Mike. After Jerry’s retirement in 1999 they moved to Geneva. Some of his interests included wood working, traveling, hunting with his sons, playing cards, eating fancy mustards, crossword puzzles, bird watching, Case tractors, and listening to polka music. He enjoyed spending time with his family at the lake, where they spent many hours in the water. He pulled many of his grandkids across the water as they learned to ski. In 1998 he participated in The Great Race across the United States with Lawrence Lichti, Roland Saltzman, and Don Saltzman. They drove across the nation in “Miss Daisy” their 1940 LaSalle coupe. They avoided trouble for most of the trip, but hit a deer about a mile east of Shickley on their way home. He talked about it often and had very fond memories of the experience. Jerry was preceded in death by his parents Clarence and Joyce Krause; his parents in-law Rudolph and Ardis Jansen; his brother in-law Ronald Davis. Those remaining to honor his memory are loving wife Shirley; NE; daughter Vicki Hoarty and husband Tim of Rockwall, TX; daughter Connie Reinsch of Geneva, NE; son Marc Krause and wife Marilyn of Evergreen, CO; son Mike Krause and wife Stephanie of Prairie Village, KS brother Gene and wife Marj of Colorado Springs, CO; sister Bonnie Yorges and husband Don of Wheatland, WY; brother in-law Ralph Jansen and wife Barb of Exeter, NE; sister in-law Colleen Davis of York; grandchildren Travis & Aftan Reinsch of Lincoln, NE; Nate & Chelsey Lefever of Geneva, NE; Gerad Krause of Denver, CO; Nick Krause of Denver, CO; Dylan Hoarty of Dallas, TX; Tyson Reinsch of Lincoln, NE; Ashley Krause of Evergreen, CO; Sydney, Chloe, and Joe Krause of Prairie Village, KS; great grandchildren Cooper and Hudson Lefever of Geneva, NE; and many nieces, nephews, and friends. Services for Jerry will be held Friday, August 5, 2011, at 10:30 a.m. at the United Methodist Church in Geneva. Interment will be in the Geneva Public Cemetery. Public visitation will begin Thursday at 1:00 p.m. until 8:00 p.m. at the Farmer & Son Funeral Home in Geneva, Nebraska. Memorials are directed to the United Methodist Church in Shickley or Geneva or to the Family.

Gerald (Jerry) Clarence Krause was born May 26, 1931 on a farm northwest of Shickley, Nebraska to Clarence and Joyce (Ogg) Krause. He was the oldest of three children born into the family. He passed away on Sunday, July 31, 2011 at Fairview... View Obituary & Service Information

The family of Gerald C. Krause created this Life Tributes page to make it easy to share your memories.

Send flowers to the Krause family.