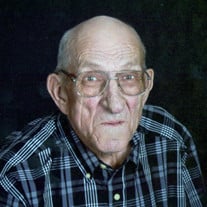 Funeral Services for Gerald will be held on Thursday, March 9, 2017 at 10:00 a.m. at the St. John's Lutheran Church in Cordova, Nebraska with Pastor Brian Tuma officiating. Visitation will be held on Wednesday, March 8, 2017 at Farmer Funeral Home in Exeter, Nebraska from 1:00 p.m. until 8:00 p.m. with the family greeting the public from 4:00 to 6:00 p.m. In Lieu of Flowers - memorials are to be directed to the Lutheran Laymen's League. Graveside Services will be conducted at the Pleasant Ridge Cemetery in rural McCool Junction, Nebraska. Gerald Edward Lutz was born on January 7, 1929 to Philip Henry Lutz Jr. and Sophia Henrietta (Maler) Lutz. He was born on the family farm in rural Fairmont. Gerald passed away on March 5, 2017 at the York General Hospital in York, Nebraska. He was 88 years - 1 month - 26 days old. He was baptized at Saint John’s Lutheran Church in Cordova and confirmed at Emmanuel Lutheran Church in York. He was one of seven children in his family. Gerald completed the 8th Grade at District #76 in York County and attended one year of high school in York. While going to high school, he lived with the Haack family. Gerald served his country for 2 years in the Korean War. When he walked down the gang plank of his ship in Korea an officer marked his helmet with an “X”. The officer told them that all the soldiers with that mark were to be cooks in the army. He was united in marriage to Dora Jane Keen on May 20, 1962 at North York Saint Paul’s Lutheran Church. They were blessed with two children, Jeana and Norman Gerald. Gerald was a lifetime farmer who loved growing crops and raising cattle. He always said, “I plant the seeds and God produces the harvest”. He farmed with his brother Bernard and his son Norman for many years. Gerald also sold German Farmer’s Mutual Insurance for many years and enjoyed meeting with his many customers. He also served on his local CO-OP elevator board. Gerald enjoyed serving his church, Saint John’s Lutheran, in Cordova, Nebraska. He looked forward to attending church services and adult bible study each Sunday. He served on the church board of finance for many years. He loved God with all of his heart. He enjoyed bowling on the Noler’s Trucking Bowling Team for many years and he liked watching westerns on television. Gerald and Jane were longtime members of a card club that they enjoyed. He also enjoyed attending Senior Meals at the McCool Junction Community Hall. He embraced traveling and visited Jeana, Bruce and their family in California. Gerald dearly loved spending time with his family. His sister, Elaine took him for many rides around the countryside, which he dearly enjoyed. Gerald loved spending time with his grandchildren and great-grandchildren. He never met a person he couldn’t carry on a conversation with. He always had a smile on his face! Gerald was preceded in death by his parents, Philip Henry Lutz Jr. and Sophia Henrietta (Maler) Lutz; sisters, Anna Lutz, Velma Selvig, Ruth Lutz and Vera Blum (husband, Harold); brother, Bernard H. Lutz and brother-in-law, Bob Selvig. He is survived by his wife, Dora Jane; sister, Elaine Lutz; sister-in-law, Velma Lutz; daughter, Jeana (Bruce) Rogers; son, Norman G. (Robin) Lutz; grandchildren, Danielle Lutz, Samantha (Vince) Watson, Philip Lutz, Conrad Martinez, Chloe Martinez, Ryan Rogers, Drew (Shaya) Rogers, Lacy (Josh) Radecki, Dane Rogers and Cassandra (Kieran) Devlin; great-grandchildren, Allyson Nicole Cuevas, Vanna Jo Watson and Brooklyn Louise Radecki and many nieces and nephews.

Funeral Services for Gerald will be held on Thursday, March 9, 2017 at 10:00 a.m. at the St. John's Lutheran Church in Cordova, Nebraska with Pastor Brian Tuma officiating. Visitation will be held on Wednesday, March 8, 2017 at Farmer Funeral... View Obituary & Service Information

The family of Gerald E. Lutz created this Life Tributes page to make it easy to share your memories.

Funeral Services for Gerald will be held on Thursday, March 9,...

Send flowers to the Lutz family.