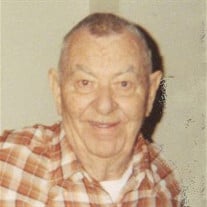 Funeral services for Gerald "Jerry" Pickerell will be 10:30 a.m. Saturday, January 17, 2015 at the Farmer & Son Funeral Home in Geneva, Nebraska. Military Graveside will follow the service at the Geneva Public Cemetery. Visitation will begin Friday at 1pm until 8 pm at the Farmer & Son Funeral Home. Memorials are directed to the family Gerald Arthur (Jerry) Pickerell was born on February 19, 1921, at Kearney, Nebraska, the only child of Arthur L. and Marguerite (Fitzgerald) Pickerell. He died on January 11, 2015 at Mount Carmel Home at the age of 93 just short of his 94th birthday by 39 days. Jerry’s parents separated soon after his birth so, to a great extent, he was raised by his grandparents, Patrick and Margaret Fitzgerald, in their Kearney home while his mother worked. His father died in March, 1929, at Whitman, NE without ever getting to know his son. Jerry attended St. James Parochial School and graduated from Kearney High School in 1939. He immediately began an apprenticeship in the printing trade at the Kearney Daily Hub. On July 10, 1940, Jerry married his high school sweetheart, Betty Irene Osborne of Kearney, at Norton, Kansas. To this union five children were born. The couple lacked 40 days of celebrating their fiftieth wedding anniversary when Betty was taken by death at Geneva, NE on June 6, 1990. While working at the Holdrege Daily Citizen, Jerry noted that all the young men were going into the military to fight during World War II. On July 24, 1942, he enlisted in the United States Army. He was stationed at camps in Arkansas and Texas before being sent to Italy. He served as an Infantry weapons instructor with his highest rank being sergeant. He received and honorable discharge at Camp Bowie, Texas on October 30, 1945. Jerry returned to Nebraska and again took up his life’s work as a printer and a newspaper man. He worked for several Nebraska publications, besides owning and publishing three small weekly newspapers of his own. One of his newspapers, The Thayer County Banner-Journal, at Bruning, NE won for him the Nebraska Press Association’s General Excellence award in 1967. Twenty-two years of Jerry’s life were spent on the staff of the Nebraska Signal at Geneva. He first was a printer and later became the paper’s editor under the publishers, the Edgecombe family. While active in business, Jerry belonged to several service and social organizations in places where he lived. He was a fireman and served as fire chief at Elm Creek, NE. In Geneva he belonged to the Lion’s Club and Rotary International. He maintained a Life membership in the Samuel J. Marsh Post 7102, Veterans of Foreign Wars. He was active in the Chambers of Commerce and Commercial Clubs in towns where he lived and worked. His newspapers all were members of the Nebraska Press Association. After his wife’s death in 1990, Jerry sold their home in Geneva and moved to the Good Samaritan Retirement Village in Hastings, NE. On September 27, 1992, he married Charlotte Goken of Scott City, Kansas. They resided at Good Samaritan Village and did some traveling until they moved to the Kensington, an assisted living residence, in August, 2005 in Hastings. In 2012, Jerry and Charlotte divorced and in February, 2014, Jerry moved to the Mount Carmel Home in Kearney, NE until his death. Preceding Jerry in death were his parents and his wife, Betty. He is survived by his children and their spouses, Mrs. Judith (Ron) Pendergraft of Golden Canyon, AZ; Donald (Dorothy) Pickerell of Columbia, MO; Mrs. Sue (Delbert) Naiman of Gilead, NE; Mrs. Denise (Richard) Wagner of Kearney, NE; Mrs. Nancy (Scott) Calahan of Chandler, AZ. He is also survived by 15 grandchildren and 27 great-grandchildren.

The family of Gerald A. Pickerell created this Life Tributes page to make it easy to share your memories.

Funeral services for Gerald &quot;Jerry&quot; Pickerell will be 10:30 a.m....

Send flowers to the Pickerell family.