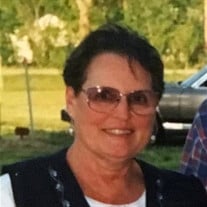 A Memorial Service will be held for Geraldine on Tuesday, December 5, 2017 at 2:00 p.m. at the Fairmont Community Church in Fairmont, Nebraska with Pastor Pat Norris officiating. No Visitation - Cremation. Burial of Ashes will be held following the memorial service at the Fairmont Public Cemetery in rural Fairmont, Nebraska. Memorials are to be directed to the family for a later designation. Geraldine Gladys Swanson was born on March 27, 1932, to Robert R. and Gladys Shaneyfelt Swanson, in Long Pine, Nebraska. She passed away on December 2, 2017, at Fairview Manor in Fairmont, Nebraska, at the age of 85 years. Geraldine was the only child born to Robert and Gladys. Gerry grew up on the Swanson Ranch, south of Bassett, Nebraska, where she attended country school before graduating from Rock County High School. Gerry often joked about riding her horse “Bucky” to country school, a foreshadowing of her future travels with another Buck. Gerry attended Nebraska Wesleyn where she earned a teaching certificate, and met Duaine Lee Roper. Teaching assignments in both Alliance and York, Nebraska were accepted, and on June 5, 1957, Gerry married Duaine “Buck” Roper. The couple briefly lived in Chicago, Illinois while Buck finished his education at DeVry Technical Institute. Buck and Gerry then moved to Denver, Colorado, where Buck began employment with the Lockhead Martin Company. After a brief relocation and assignment to California for the Titan Missile Project, Buck and Gerry returned to Denver, where Buck took a job with the Jewel T Company. It was in Denver, Colorado, where Gerry became a Mother, adopting Robert Curtis in October of 1961, and Julie Denise in April of 1964. Buck and Gerry then returned home to Fairmont, Nebraska, moving into Grandma Avery’s home. Gerry served as a substitute teacher in Fairmont before accepting a position with the Geneva Schools in 1968 as a Second Grade teacher. In 1970, she accepted a change of position to work with students grades 1-6 who had learning challenges. Gerry retired from teaching after 30 years of service. As retirees, Buck and Gerry enjoyed travelling. Most of their time was spent in their fifth-wheel camper, travelling the country and meeting up with other camper friends. Bentsen Grove Park in Mission, Texas, was their winter base of operations, while summer found them back home in Fairmont. Gerry enjoyed remodeling the old Avery house room by room. She was creative, and always had a project underway, whether it was sewing matching dresses for family members, or swim cover-ups for Julie and her friends. She enjoyed quilting, quilling, wallpapering, and furniture refinishing. She loved to go to auctions, and “garage sale-ing” was a standard Saturday morning event. Gerry continued many of these hobbies while travelling in the camper, and added afternoon porch parties in Bentsen Grove Park as another of her favorite activities. Gerry was preceded in death by her husband Duaine “Buck” Roper, her parents, Robert and Gladys Swanson, her daughter-in-law Ann Hannika Roper, her great granddaughter and niece Gretchen Roper. She is survived by son Rob, daughter Julie and husband Joaquin Menendez, 6 grandchildren, 10 great grandchildren, brother-in-law Delvin Roper, sister-in-laws Carolyn and Delores Roper, 5 nieces and nephews, and numerous Swanson cousins.

A Memorial Service will be held for Geraldine on Tuesday, December 5, 2017 at 2:00 p.m. at the Fairmont Community Church in Fairmont, Nebraska with Pastor Pat Norris officiating. No Visitation - Cremation. Burial of Ashes will be held following... View Obituary & Service Information

The family of Geraldine Gladys Roper created this Life Tributes page to make it easy to share your memories.

A Memorial Service will be held for Geraldine on Tuesday, December...