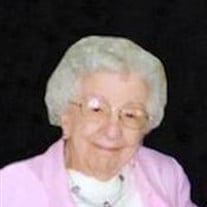 Gladys Emma Gibbons born to Fred and Caroline (Kappmeyer) Eppler on Jan. 23,1916, in Ohiowa, Nebraska, Gladys Gibbons passed away on April 6, 2013, at Tabitha in Lincoln, Nebraska, at the age of 97 years, 2 months, and 14 days. She was one of 7 children. Gladys was baptized and confirmed at St. John Evangelical Lutheran Church in Ohiowa, Nebraska. She attended school in Ohiowa, graduating in 1933. After graduating, Gladys went to live and work in California with relatives eventually returning to Nebraska. Gladys married Norvie Gewecke in 1937 and the union was blessed with three girls and one boy living in Geneva, Nebraska. She was widowed at age 30, and shortly afterwards, son Robert died at age three of spinal meningitis. Gladys continued living in Geneva raising her girls, Joyce, Carolee, and Marcia. She worked as a seamstress and was employed by Walton Furrier. Gladys' excellent skills with a needle and thread were commonly known. Gladys then married Leo Gibbons in February 1952 and moved to Exeter, Nebraska. This marriage was also blessed with a daughter, Cindy. Gladys and Leo raised their family and lived in Exeter until 1973. Then, they moved to Lincoln where Gladys managed apartments for 21 years. Leo passed away in July of 1994, and Gladys retired later that year. Afterward, she moved to Charles Senior Housing. Retirement was a new part of her life. She enjoyed time with family and met many new friends. She played cards on a regular basis, and she enjoyed many activities throughout the week. Many of those friendships continued until her death. Minor health issues prompted her to move to Clark Jeary Retirement in the fall of 2010. She enjoyed an independent life there playing cards and listening to audio books while also spending time with her family. Gladys moved again in the fall of 2011 to Tabitha due to a slight decrease in health but still continued an independent lifestyle until the week prior to her death on April 6, 2013. Gladys was a lifelong member of the American Legion Auxiliary. Her greatest joy was time spent with her family. Gladys was preceded in death by her parents, Fred and Caroline Eppler; husbands, Norvie Gewecke, and Leo Gibbons; son, Robert Gewecke; daughter, Joyce Griffith; brothers, Virgil Eppler and George Eppler; sisters, Elsie Cook, Lilly Mears, Fern Garland, and Mary Hazelbring. She is survived by three daughters, Carolee (Larry) Schneider of Ralston, Marcia (Dean) Beecher of Shenandoah Iowa, and Cindy (Rich) Roettger of Lincoln; 12 grandchildren, 22 great-grandchildren, 4 great-great-grandchildren; nieces, nephews; cousins; and special friends, Bob and Jan Brockmeyer. Funeral service for Gladys will be Friday, April 12, 2013 at 2:00 p.m. at the Farmer Funeral Home in Exeter, Nebraska. Visitation will begin Thursday at 3:00 p.m. until 8:00 p.m. at the funeral home. Burial will be in the Exeter Cemetery. Memorials are directed to the family for later designation.

Gladys Emma Gibbons born to Fred and Caroline (Kappmeyer) Eppler on Jan. 23,1916, in Ohiowa, Nebraska, Gladys Gibbons passed away on April 6, 2013, at Tabitha in Lincoln, Nebraska, at the age of 97 years, 2 months, and 14 days. She was one of... View Obituary & Service Information

The family of Gladys E. Gibbons created this Life Tributes page to make it easy to share your memories.

Send flowers to the Gibbons family.