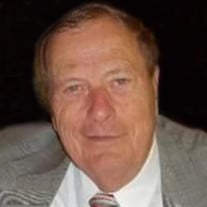 A Funeral Service for Glen will be held on Tuesday, March 8, 2022 at 11:30 a.m. at Farmer & Son Funeral Home - Kotas Chapel in Milligan, Nebraska with Pastor Larry Gouin presiding. Visitation will be held on Monday, March 7, 2022 from 4:00 p.m until 7:00 p.m. with the family present during that time at Farmer & Son Funeral Home - Kotas Chapel in Milligan, Nebraska. Graveside Services will be conducted following the funeral service in the Bohemian National Cemetery in Milligan, Nebraska. Memorials are to be directed to the family to be designated at a later date. To view the Livestream Video you can go to Farmer & Son Funeral Home's Facebook Page or in your search engine type @friendlyfuneraldirectors and click the link to Farmer & Son or click this link https://www.facebook.com/friendlyfuneraldirectors/Funeral and it should direct you to our Facebook Page. Glen Soukup, passed away on Tuesday March 1st, 2022, at home. Glen was born to Frank and Allene Soukup on Feb. 1st, 1942, in Lincoln, Nebraska. He attended Lincoln Public Schools, graduating from Lincoln High School in 1959. He then attended the University of Nebraska obtaining his undergraduate degree and was an esteemed member of the Golden Key Society. Glen then continued his education at the University of Nebraska College of Law earning a Juris Doctorate of Law in 1967. He was proud to have worked for Nebraska Governor James Exon's administration as Director of the State Technical Assistance Agency for several years. He then went on to pursue personal business ventures. Glen was a lifelong resident of Lincoln, spending a good portion of time at his fishing cabin/summer home, also known as “The Castle in the Canyon” located at Decker’s, Colorado. Some of his favorite times were spent enjoying his specialty "Mountain Margaritas" and red beers, or a jack and coke on the upper deck. He loved watching the hummingbirds and afternoon showers from his canyon view veranda, evenings with Trudy breathing in the fresh mountain air, and all times spent with his favorite Golden Retriever, Dylan. Glen will be fondly remembered by family and friends for generously hosting so many at his beloved cabin, and for always sharing the beautiful sights the Colorado mountains had to offer. In earlier years he and his daughter Nicholle enjoyed spending time at his mother’s farms near Crete and Wilber, experiencing nature and farm life while embracing their Czech culture with family. During the last few years though his health began to fail he did his best to maintain close relationships with family and friends and enjoyed many games of cards while partaking in a few adult beverages. Glen was preceded in death by his father Frank H. Soukup, mother Allene B. Tesar, brother Kenneth J. Tesar, sister-in-law Linda S. Soukup, and the best dog ever Dylan “Doolittle” Soukup. Glen is survived by daughter Nicholle Soukup of Norfolk, granddaughter Haleigh Kappel of Lincoln. grandson Holden Soukup of Central City, and great grandson Trace Reynolds of Lincoln. Brother Allen (Janice) Soukup, nephew Kelsey Soukup all of Lincoln, and niece Jessica (Michael) Zmek of Archer. Sister Jo Ann (Steve) Kroll, nephew Peter Kroll, and nephew Jeremiah (Megan) Kroll all of Lincoln. Brother Gregory Soukup, nephew Frank (Kim) Soukup, and nephew James (Liz) Soukup all of Lincoln. Sister in law Marianne Tesar of Crete, niece Ashley Tesar of Lincoln, and niece Whitney (Ryan) Peterson of Palmer, MN. Long time special friend Trudy Townley of Lincoln. He is also survived by many great nephews and nieces, cousins- many of whom were like siblings to him, his church family at Four Square church, and of course many dear friends. The Glen Soukup family would like to extend a very heartfelt, and appreciative THANK YOU to all whom helped Glen in recent years. Being very strong in his faith Glen would always say “the good Lord will take care of me”, we may all now rest assured that has been done.

A Funeral Service for Glen will be held on Tuesday, March 8, 2022 at 11:30 a.m. at Farmer & Son Funeral Home - Kotas Chapel in Milligan, Nebraska with Pastor Larry Gouin presiding. Visitation will be held on Monday, March 7, 2022 from 4:00... View Obituary & Service Information

The family of Glen J. Soukup created this Life Tributes page to make it easy to share your memories.

A Funeral Service for Glen will be held on Tuesday, March 8,...

Send flowers to the Soukup family.