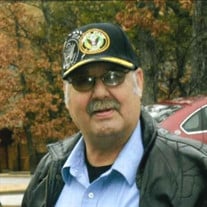 A Memorial Service for Glenn will be held on Friday, September 25, 2020 at 2:00 p.m. at the Trinity Lutheran Church in Bruning, Nebraska with Pastor Stuart Sell and Reverend Kathy Rahorst presiding. No Visitation - Cremation. Military Honors will be conducted by the Geneva VFW Samuel J. Marsh Post 7102 following the Memorial Service. Inurnment will be held at a later date at the Arlington National Cemetery. Memorials are to be directed to the Geneva VFW. A Livestream Video of the Funeral Service will begin at 2:00 p.m. To view the Livestream Video you can go to Farmer & Son Funeral Home's Facebook Page or in your search engine type @friendlyfuneraldirectors and click the link to Farmer & Son Funeral Home's Facebook Page. You do not have to have Facebook to view the Livestream Video. Glenn Bruce Roesler was born to Fredrick William Roesler and Leola Louise (Neimeyer) Roesler on May 3, 1947 in Beatrice, Nebraska, and passed away September 4, 2020, at his home in Geneva, Nebraska, at the age of 73. He was one of 4 children in the family and was an hour older than his twin sister Glenda. Glenn grew up on a family farm in rural Saline County where he enjoyed hunting and fishing in the pasture and helping with chores. He attended parochial school at Zion Lutheran Church, of rural Tobias, before graduating from Tobias High School in 1965. Glenn was drafted twice into the Army, with receiving a deferral, for family, the first time. The second time he was called, he went to Fort Lewis, in Washington State for basic training in December of 1970, and was sent to Vietnam in 1971. Glenn was assigned to the 360th Transportation Unit hauling everything from beer to jet fuel along the coast and mountains of south Vietnam. After being honorably discharged from the service, in 1972, Glenn worked at several different jobs before finding his spot at the City of Geneva. Due to health, Glenn retired in January of 2010 after working for the city for 37 years. Glenn met his future wife, Becky South, at Fran’s Cafe in Geneva. They were united in marriage on June 29, 1975. They spent 45 years together, in their home, where they raised their three children; Sheila, Sarah and Andrew. Glenn was an active community member serving in numerous leadership roles, or working behind the scenes to help where needed. Family, faith and service were important to Glenn. He coached his daughters in softball and was his children’s loudest fan. Glenn taught Sunday School and served on church council at Prince of Peace Lutheran Church in Geneva, and later at Trinity Lutheran in Bruning, Nebraska. He volunteered on the Geneva Fire Department for 25 years. He, as well, served several terms as a Commander for the Samuel J. Marsh V.F.W. Post 7102 and the American Legion in Geneva. He served as the Quartermaster for the southeast region of the Legion of Nebraska. Glenn loved sports, with his favorite teams being whatever team his children were playing on and the Huskers. While in Vietnam, he enjoyed listening to recordings of Husker games his sister, Glenda, would send to him. By the end of the first quarter, the barracks were full of men listening to those games. Glenn and Becky made it a point to attend all of their children’s games. He would often sit and watch whatever sport might be on tv and talk about the plays with whoever would listen. Glenn had the gift of gab and never met a stranger, just someone he hadn’t met yet. He had the ability to spot a Veteran from across the room and always made sure to stop and thank them for their service. He was quick to smile, enjoyed jokes, and good-natured teasing, even if it was at his own expense. Glenn usually had a quick comeback to when his family would jokingly give him a hard time. In retirement, Glenn enjoyed volunteering for the Red Cross Bloodmobile, World War II Honor Flights, and spending as much time with his two grandsons as possible. Glenn would travel to Indiana to watch his oldest grandson play in different sports and spend time with his daughter’s family. Glenn had a unique presence about him which drew in his nieces, nephews and other children, including those in Vietnam. It wouldn’t be uncommon for a child to approach Glenn to play a game with them or to just sit with him. He became a second dad to many of his children’s friends. In the last year of his life, Glenn received excellent care at the Fairview Manor in Fairmont, Nebraska and at home with Tabitha Hospice. Glenn’s family is forever grateful for the care and compassion he received. Glenn was preceded in death by his parents, Fred Roesler and Leola Roesler, sister Karen Holtmeier, sister-in-law Dixie Schmidt, brother-in-laws, Bill Stirba and Roger Schdmidt, nieces Dawn Lichti, Stacy Stirba and nephew Chad Holtmeier. Glenn is survived by his wife Becky Roesler of Geneva, daughters Sheila (Roesler) Mullikin (Dave), of Brownsburg, Indiana, Sarah Roesler of Fairbury, Nebraska, son Andrew Roesler of Geneva, Nebraska, and grandsons Jackson Mullikin of Brownsburg, Indiana, and Kolby Kirkpatrick of Lincoln, Nebraska. Sisters Sandra Lichti (Max), of Geneva, Nebraska, and Glenda Stirba of Daykin, Nebraska, and brother-in-law Glennis Holtmeier (Janet) of Tobias, Nebraska. Mother-in-law Loreen South, of York, Nebraska, sister-in-laws Susan Humes (Tom) of West Richland, Washington, Ronda Rich (Lynn) of York, Nebraska, Gina Jorgenson (Joe) of Evanston, Wyoming, Peggy Gebert (Fred) of Yuba City, California, brother-in-laws Larry South (Gloria) of Council Bluffs, Iowa, and Jerry South of Council Bluffs, Iowa, many nieces and nephews and the men of the 1971-72 360th Transportation Unit.

A Memorial Service for Glenn will be held on Friday, September 25, 2020 at 2:00 p.m. at the Trinity Lutheran Church in Bruning, Nebraska with Pastor Stuart Sell and Reverend Kathy Rahorst presiding. No Visitation - Cremation. Military Honors... View Obituary & Service Information

The family of Glenn B. Roesler created this Life Tributes page to make it easy to share your memories.

A Memorial Service for Glenn will be held on Friday, September...

Send flowers to the Roesler family.