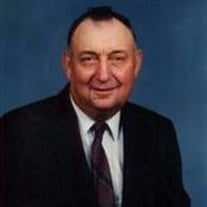 Glenn Walter Schwisow was born August 4, 1929, at Daykin, Nebraska, to Walter John Schwisow and Grace Mumby Schwisow. He passed away on February 25, 2013, at Fairview Manor in Fairmont, Nebraska, following a brief hospital stay, at the age of 83 years, 6 months, 21 days. Glenn was baptized and confirmed at Emmanuel Lutheran Church in Daykin. He graduated from Western High School with the class of 1946. Following graduation, he began his earth moving business with a single D7 Caterpillar together with his father and brother, called Schwisow and Sons Construction, which he successfully grew and operated for 44 years. He served in the United States Army, 1st Cavalry Combat Engineers, from 1951-1952, including active combat in Korea, achieving the rank of Staff Sergeant. After returning to the states in 1952, he met Dee Ann Kasl of Swanton, Nebraska. They wed on August 15, 1954, the beginning of 58-years of marriage. They made Swanton their home, and raised two daughters, Katherine Jo and Karolyn Ann. Glenn was active in the community, was elected to the town board 11 times, serving 45 years. He also served on the volunteer fire department for over 40 years. He was a member of the Swanton American Legion Post 258 for over 60 years and is a lifetime member of Geneva VFW Post 7102. Glenn and Dee Ann moved to Geneva, Nebraska, in June 2011. Glenn, an avid fisherman, and his wife enjoyed traveling in their motor home and visited most of the National Parks in their later years. While at home, he enjoyed attending his grandsons’ school and sports activities, playing cards at the Corner Tavern, and always looked forward to the annual Schwisow Cousins Reunion. His dog, Pete, was a constant companion. Glenn was a loving husband, father, and grandfather, and served as an example to his family of the value of hard work and honesty in conducting business. Glenn is preceded in death by his parents, Walter and Grace Schwisow of Swanton; brother Laurin Schwisow of Jansen; and nephew, Laurin (“Butch”) Schwisow of Lincoln. He is survived by wife, Dee Ann Schwisow of Geneva; daughters and sons-in-law Katherine and Michael Chaney of Geneva, and Karolyn and Kip Burchfield of Omaha; grandsons Brett and Drew Chaney of Geneva, and great-grandson Jackson Chaney of Geneva; sisters Linda Van Meter of Lincoln, and Verda Shields of Concordia, Kansas; brothers-in-law and their wives, John and Connie Kasl of Staplehurst, Nebraska, and Paul and Melody Kasl of Sun Center, Florida; cousins and many nieces, nephews and friends. Funeral services for Glenn were conducted from the Geneva United Methodist Church on Saturday, March 2, 2013, at 10:30 a.m. with Pastor Ron Harris officiating. Nancy Nichols accompanied the congregation in the singing of “Amazing Grace” and “How Great Thou Art.” The recorded selections “There Will Be Peace In The Valley,” and “The Lord’s Prayer” were also played during the service. Pallbearers included Kip Burchfield, Michael Chaney, Brett Chaney, Drew Chaney, Bill Kasl, and Roger Kasl. Honorary pallbearers were Larry Wilkinson, Bruce Drake, Bruce Churchill, Alan Strouf, Billy Schwisow, and Duane Sutter. Internment was in Geneva Public Cemetery with Military Rites performed by the Geneva VFW Samuel J. Marsh Post 7102. Memorials are directed to the family to be designated later. Farmer & Son Funeral in Geneva was in charge of the arrangements.

Glenn Walter Schwisow was born August 4, 1929, at Daykin, Nebraska, to Walter John Schwisow and Grace Mumby Schwisow. He passed away on February 25, 2013, at Fairview Manor in Fairmont, Nebraska, following a brief hospital stay, at the age... View Obituary & Service Information

The family of Glenn W. Schwisow created this Life Tributes page to make it easy to share your memories.