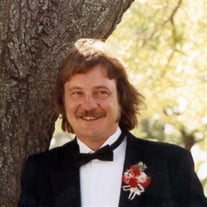 A Memorial Service for Hank will be held on Sunday, June 2, 2019, at the Friend Congregational Church in Friend, Nebraska at 1:00 p.m. with Pastor Dave Coleman presiding. The family will be receiving visitors at the book signing on Friday, May 31, 2019, at Farmer Funeral Home in Exeter, Nebraska from 6:00 to 7:30 p.m. Committal of Ashes will be held at the Zastrow Cemetery in Cordova, Nebraska. Memorials are to be directed to the family to be designated at a later date. Hank Jensen was joined with Lowell Jensen and Sis (Hulse) Jensen on December 4, 1958 in Cordova, Nebraska, and passed away on May 27, 2019, at Warren Memorial Hospital in Friend, Nebraska at the age of 60. He was one of three children in the family. Hank was a lifelong resident of small-town rural living. He and his wife, Kim, resided on the family farm he grew up on outside of Cordova, Nebraska. He graduated from Exeter High School in the Class of 1977. Hank grew up in the family farm way of life and was Lutheran raised, going to Sunday school, church and having Sunday family dinners. Family gatherings were most weekends; he and his cousins grew up as close as siblings. Hank’s family raised cattle and farmed. As a boy and young man, Hank worked closely together with his Father, Lowell, on the farm. Although he loved farming, Hank’s passion for the wide-open road, behind the wheel of a semi-truck, began after high school. He acquired his first trucking job where he worked for Billy R. Jacobsen. Over the years of trucking and farming, Hank and his father, Lowell, partnered together to buy a semi-truck. This was the beginning of his owner/operator trucking business. He was not a man to “clock in”. Hank stayed in the agriculture and trucking occupation. Selling his first truck led to his employment at Glen T. Peterson Farms where he stayed for several years. The Last 10 years he worked for HRW Farms. He was proud to do what he did and always said, “It’s not what I do, it’s who I am.” Hank was a very patriotic man; his passions included music, hunting, fishing, politics, classic tractors and his grandkids. Family was everything to him. Friendships with Hank were life-long; he still has his friends from when they were kids. He knew how to live life and have fun doing it. He once said, “We spent a week there one night”, that says it all. Hank was married to Kim Spidle of York, Nebraska on June 4, 1987, and to them two children were born. Hank was preceded in death by his parents, Lowell and Sis Jensen; uncles, Dale Jensen, John Jensen and Mark Foreman; aunt, Elizabeth “Betty” Foreman; cousins, Steve Foreman and Cindy Jensen and mother-in-law, Pat Spidle. He is survived by his wife, Kim Jensen of Cordova, Nebraska; sons, Dillon Jensen of Lincoln, Nebraska and Gus Burhoop of Columbus, Nebraska; granddaughters, Jamee and Kairi Burhoop; grandson, Jon Burhoop; sisters Dawn (Jensen) Hiatt of Fishers, Indiana and Deann (Jensen) Talavera of Tampa, Florida; nieces, Emily and Brooke Hiatt of Fishers, Indiana and Michaela McMahon of Tampa, Florida; father-in-law, Bud Spidle of York, Nebraska; brothers and sisters-in-law, Jim Seevers and Lyn Shaw of York, Nebraska and Chuck Spidle of York, Nebraska; many cousins, nieces, nephews and friends.

A Memorial Service for Hank will be held on Sunday, June 2, 2019, at the Friend Congregational Church in Friend, Nebraska at 1:00 p.m. with Pastor Dave Coleman presiding. The family will be receiving visitors at the book signing on Friday,... View Obituary & Service Information

The family of Hank Jensen created this Life Tributes page to make it easy to share your memories.