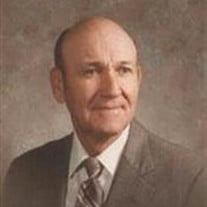 Funeral services for Harold will be Thursday, September 26, 2013 at 10:30 a.m. at the Grace Lutheran Church in Geneva. Graveside services will follow the funeral in the Grafton Public Cemetery. Visitation will be Wednesday from 1:00 p.m. to 8:00 p.m. at the Farmer & Son Funeral Home in Geneva. Memorials are directed to the Grace Lutheran Church. Harold Herman Everts was born on July 22, 1918 to Reinhard and Etta Anna Marie (Baumann) Everts on the family farm near Sutton, Nebraska. He passed away on September 21, 2013 at Heritage Crossings in Geneva, Nebraska at the age of 95 years, 1 month, 29 days. He was the oldest of six children in the family. Harold was baptized at home when he was born and was confirmed June 4, 1933 at Trinity Lutheran Church in Grafton, Nebraska. Harold attended Country School 74. After graduating from Sutton High School in 1937, he began farming. Harold was married to Dorothy Schumacher on May 3, 1942. He and Dorothy farmed southwest of Grafton. The marriage was blessed with three children. Dorothy passed away October 3, 1972. On January 5, 1974, Harold was married to Helen Riel of Geneva. They continued living and working on the farm until Harold retired in 1988 and they moved to a home in Geneva. Harold and Helen moved into Heritage Crossings Assisted Living in 2009. Harold was an active member of the Trinity Lutheran Church in Grafton and later Grace Lutheran Church in Geneva. After retiring from farming, Harold and Helen enjoyed taking various trips around the country. He could often be found helping Helen with her hobby of making fur bears. Harold enjoyed being a father, grandfather, and great grandfather. Harold was preceded in death by his parents; first wife Dorothy; infant sister Esther; brother Dale Everts; brother-in-law Don Hartmann; and brother-in-law Walt Hartmann. Harold is survived by his wife Helen Everts of Geneva; son Ronald Everts of York; daughters Gloria Walker & husband Jim of Omaha and Carol Everts of York; sisters Della Hartmann of Seward and Viola Hartmann of Minden; brother Warren & wife LaDonna Everts of McCook; granddaughter Anne & husband Colby Mathews of Lee’s Summit, Missouri; grandson Matt Walker of Omaha; great grandchildren Max, Oliver, and Ella of Lee’s Summit, Missouri; sisters-in-law Wilma Struppa of Copiague, New York and Darlene Schumacher of Geneva and Doris & husband Rex Phillipi of Bruning; and brother-in-law Gary & wife Janice Schumacher of Longmont, Colorado.

Funeral services for Harold will be Thursday, September 26, 2013 at 10:30 a.m. at the Grace Lutheran Church in Geneva. Graveside services will follow the funeral in the Grafton Public Cemetery. Visitation will be Wednesday from... View Obituary & Service Information

The family of Harold H. Everts created this Life Tributes page to make it easy to share your memories.

Funeral services for Harold will be Thursday, September 26, 2013...

Send flowers to the Everts family.