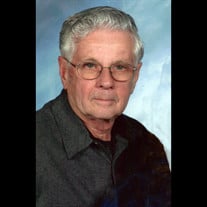 Harold Arthur Sole, known to many as Buzz, was born to Arthur Holland Pate Sole and Mildred Sylvia (Heath) Sole on December 23, 1935 at Geneva, Nebraska, and lost his battle with cancer on August 30, 2019, at his home in Geneva, Nebraska at the age of 83 years, 8 months and 7 days. He was the second of four children who included Ardyce Whiteley, Keith “Pete” Sole and Sherrie Andrews. When Harold was 11 years old, his father, Art, passed away from leukemia. His mother, Mildred, had to work very hard to support the four children. Harold and his siblings also had to take on extra responsibilities to help support the family. He began working at a young age and continued working throughout his high school years. Harold graduated from Geneva High School in 1954. After graduation he continued working as a mechanic at the Buick Garage in Geneva. On October 26, 1958 Harold was united in marriage to Viola Arlene Wall at the Christ Lutheran Church in Davenport, Nebraska. They were blessed with 42-years of marriage until her passing on February 17, 2001. In 1958, he enlisted in the US Air Force and following basic training was stationed at a radar site in Iceland. After serving a year in Iceland, he was stationed for three years in Omaha, Nebraska and then to Finley, North Dakota for several months until his discharge in 1962. Harold and Viola were blessed with two daughters – Debra Kay born on June 9, 1961 and Patricia Jodene born on April 7, 1965. Upon returning to Geneva, Harold continued his automotive career as a mechanic. He worked at the Pontiac Garage and the OK Tire Shop. In 1970, he started on his own and in 1977 purchased the garage now known as “Buzz’s Alignment” where he continued working until his health did not permit. Buzz took pride in ensuring his customers were well taken care of. He would “squeeze” someone into the appointment book or work during the evening and weekends, just so customers were able to get where they wanted to go. In 1965, Harold joined the First Congregational United Church of Christ in Geneva. He served on the Missionary Ed & Stewardship Committee and was on the Diaconate Board. He served as a greeter and usher. He and Viola also participated in Dinner for Eight and helped with the Annual Old Fashioned Thanksgiving Dinner. Harold was a lifetime member of the American Legion, Amvets and belonged to the Ambassador Club at Heartland Bank. Harold, Viola and the girls enjoyed yearly family trips to visit family and friends. In the 60’s, there were hunting trips to Crawford, Nebraska. In the 70’s, were trips to Colorado and in the 80’s and 90’s were trips to Branson, Missouri for crafts and country music shows. In 1992, Harold won a trip through Interstate Batteries. He was able to attend a NASCAR Race at Phoenix International Raceway, a banquet with the sponsors and drivers and was able to ride three laps with NASCAR driver Dale Jarrett. Harold loved wildlife and animals. He raised chickens, ducks, geese, cows and at one time also raised wood ducks. He also had many pets during his lifetime and loved his dogs until the very end. “Buzz” was a people person and could strike up a conversation with just about anyone, from the “greeter fella” at the supermarket, to someone he met on vacation, to someone who might pull in with a car making a funny noise or not quite driving straight. He didn’t know a stranger. Many of you may remember some of Buzz’s favorite catch phrases: You Bet! You Got Somethin’ There! and Ain’t That About The Truth! Harold was preceded in death by his parents, Arthur and Mildred; his wife, Viola; his sisters, Ardyce Whiteley and Sherrie Andrews; and his brother-in-law and sister-in-law, Raymond and Carol Wall. He is survived by daughters, son-in-law, Debra and Charles Barbur Jr. of Geneva; Patricia Sole of Geneva; his dog, Sam; and his grand-dogs, Sadie Sole and Jesse Barbur; brother, Keith “Pete” Sole of Geneva; brother-in-laws, Melvin Whiteley and Alfred Andrews of Geneva; sister-in-law, Carol Dannels of Miami, Ok; nieces, nephews, and a host of other relatives and friends. Funeral services for Harold were conducted from the Farmer & Son Funeral Home in Geneva on Thursday, September 5, 2019 at 10:00 a.m. with Pastor Stuart Davis officiating. The recorded selections “How Great Thou Art”, “There Will Be Light”, and “Brand New Star” were played during the service. Pallbearers for the service included Jeff Andrews, Rob Barbur, Craig Rippe, Justin Sole, Ralph Wall and Wayne Wall. Honorary pallbearers included Harold Eppler, Lynn Koozer, Charlie Scheil and Merle Noel. Interment was held in the Geneva Cemetery with Military Rites performed by the Samuel J. Marsh Geneva VFW Post 7102. Farmer & Son Funeral Home was in care of the arrangements and online condolences can be left at www.farmerandsonfuneralhome.com Memorials are suggested to the family for future designation.

Harold Arthur Sole, known to many as Buzz, was born to Arthur Holland Pate Sole and Mildred Sylvia (Heath) Sole on December 23, 1935 at Geneva, Nebraska, and lost his battle with cancer on August 30, 2019, at his home in Geneva, Nebraska at... View Obituary & Service Information

The family of Harold "Buzz" Sole created this Life Tributes page to make it easy to share your memories.

Harold Arthur Sole, known to many as Buzz, was born to Arthur...

Send flowers to the Sole family.