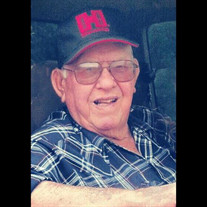 Harold Vernon Stewart, Jr. ("J.R.") was born on December 29, 1929 to Harold Vernon Stewart, Sr., and Phoebe Elizabeth (Pruden) Stewart in Arapahoe, Nebraska, and passed away on January 17, 2019, at his home in Geneva at the age of 89 years and 19 days. J.R. and his brother-in-law, Joseph Turek, owned and operated the Phillips 66 Gas Station in Geneva. J.R. had a few other jobs prior to working for Kamler Implement. He then worked for Shaner Chevrolet and Oldsmobile as their top salesman for many, many years. After retiring from Shaner's, he worked for Nick’s Farm Store, Green Country, Geneva Implement and Bill Jacobsen Car Sales as a salesman. J.R. was very honest with much integrity and a man of great faith. In January of 1952, J.R. entered the Army and served in the Korean War until December of 1953 when he was honorably discharged. J.R. was a very musical man of many talents. He played the banjo and spoons and sang in several bands including ‘The Country Boys,’ ‘The Country Has Beens,’ and ‘The 29ers.’ He loved people and enjoyed making them smile. His motto was “If you see someone without a smile, give them one of yours.” J.R. was a member of the Geneva Masonic Lodge AF & AM No. 79, Geneva VFW Post 7102, Geneva Loins Club, Geneva Fire Department, Geneva First Congregational United Church Of Christ, and he served on the Geneva City Council for many years. He played Santa Claus in the town of Geneva throughout the Christmas holidays for many years and enjoyed the love and laughter of all the children that sat on his lap wishing for their special gift for Christmas. On many Christmas Eves, he would drive around Geneva to friends and families homes and visit the small children. His sparkling blue eyes reflecting with the white beard he put on and his special “Ho, Ho, Ho” brought smiles to everyone’s face and made their holiday a little brighter. J.R. attended Arapahoe High School and lived on a farm near Arapahoe during the depression. His mother passed away when his baby sister, Sharon, was born and J.R. then moved to Neosho, Missouri to live with his older sister, Ada Jean and Harry Hadley. He later moved to Geneva where he lived with Esther and Joseph Turek. He met Judith Ann Schupbach at a carnival and always said that he fell in love at first sight with her. After courtship, they were married on December 13, 1949. To this union was born a son, Bradford Scott, and a daughter, Mary Katherine. J.R. was preceded in death by his wife Judy; great grandson Harlow Leu; parents Harold & Phoebe Stewart; and siblings Esther Turek, Mary Lou Kuhlman, Ada Jean Hadley, Robert Stewart, and Sharon Barbur. J.R. is survived by his children Bradford & Sandy Stewart of Doniphan, Nebraska and Mary & Jonathan Bradley of Waterloo, Nebraska; grandchildren Dustin & Amanda Stewart, Alyssa & Justin Leu, Dylan Stewart, Kaitlynn Bradley, Courtney Bradley; and brother-in-law Jerry “Jake” Tesar; 8 great grandchildren; and other close relatives and a host of friends. A Memorial Service for J.R. was held on Tuesday, January 22, 2019 at 1:00 p.m. at the First Congregational United Church Of Christ in Geneva. Pastor Stuart Davis officiated the service. Nancy Cradduck provided the prelude and postlude music. The recorded selections, “You Raise Me Up,” “”Where We’ll Never Grow Old,” and “What A Wonderful World” were played during the service. Honorary pallbearers for the service included Dustin Stewart, Dylan Stewart, Justin Leu, Lucas Schlote, Charles Barbur, Jr., and Robert Barbur. Inurnment with Military Rites was held in the Geneva Public Cemetery with Geneva VFW Post 7102 performing the Rites. Farmer & Son Funeral Home was in care of the arrangements and online condolences can be left at www.farmerandsonfuneralhome.com Memorials are suggested to the York Adopt-A-Pet.

The family of Harold V. "J.R." Stewart created this Life Tributes page to make it easy to share your memories.

Send flowers to the Stewart family.