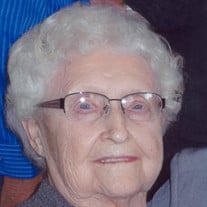 Funeral service for Harriet will be 2:00 p.m. Wednesday, November 23, 2016, at the Farmer & Son Funeral Home - Kotas Chapel in Milligan, Nebraska with Kim Dunker officiating. Visitation will begin Tuesday, at 4:00 p.m. until 8:00 p.m. at the Funeral Home in Milligan and Wednesday 12:00 noon until service. Burial will be in the Bohemian National Cemetery following the service. Memorials are directed to the family for later designation. Harriet Estella (Jansky) Synovec was born on September 9.1028, on a farm near Tobias, Nebraska and passed away on November 19, 2016, at the Wilber Care Center at the age of 88 years 2 months and 10 days. Harriet, one of five children, attended school in Tobias through the 12th grade graduating in 1945. While attending high school she received her teaching accreditation. The family moved to a farm 5 miles east of Milligan, and at that time she taught at Opossum Hill School, many days walking 1 ½ miles to and from school. She worked for 2 years saving money to purchase a kitchen table and dresser for her new home with Milton. Harriet married Milton Synovec on June 9, 1948 in Wilber, Nebraska. They made their home on a farm 8 miles east of Milligan, Nebraska where they farmed and raised their four children, Gene, Carol, Cindy and Gale. Together her and Milton ran a repair shop with Harriet being the bookkeeper for the business. Harriet was a housewife and mother and was willing to help wherever needed. Harriet loved working with her flowers, gardening, canning and freezing all the produce to be used to feed the family, and as they grew it came in very handy when they would pop in for a visit. She loved her family and after the arrival of 9 grandchildren and 18 great grandchildren time was spent with them learning to bake cookies and breads for them all to take home. She enjoyed spending time reading to the grandkids curled up on her lap. She also raised chickens and ducks and the grandkids would help gather the eggs and was affectionately known to all “Grandma Chicken.” One of Harriet’s special hobbies was making denim quilts out of Grandpas old overalls, which was presented to each grandchild and they are still enjoying them today. Harriet and Milton continued to live on the farm until Milton’s health failed and was moved to the Friend Nursing Home, passing away in 2009. Harriet made the decision to go to the Wilber Care Center in July of 2014. There she made many friends with the residents and staff and enjoyed visiting doing word search and watching television. Harriet was a very caring person and even in her final days would ask about the well being of the family. Harriet is survived by her children; Gene and wife Dorothy Synovec of Western, Carol and husband Dr. Bruce Kennedy of Crete, Cindy and husband Gary Kastanek, of Tobias, Gale and husband Curtis Zach of Wilber; Grandchildren Stacey and husband Cory Nickel, Heather and husband Tim Sejkora, Gwen Thompson, Jennifer and husband Jeff Meinke, Jon and wife Shannon Kennedy, Amanda and husband Jason Dean, Jim Synovec, Josh Zach, and Jessie Zach and 18 Great Grandchildren. Sister, Marian and husband Walt Umphlett of Santa Maria, California, brother Larry and wife Diane Jansky of Milligan. Sisters-in-law Shirley and husband Richard Brunkow of Milligan and Mary Jansky of Milligan. She was preceded in death by her parents William and Mamie Jansky, husband Milton Synovec, brothers Leslie and Lumir Jansky. Parents-in-law JC and Rose Synovec and sisters-in-law Irene Synovec and Mary Jansky.

Funeral service for Harriet will be 2:00 p.m. Wednesday, November 23, 2016, at the Farmer & Son Funeral Home - Kotas Chapel in Milligan, Nebraska with Kim Dunker officiating. Visitation will begin Tuesday, at 4:00 p.m. until 8:00 p.m. at the... View Obituary & Service Information

The family of Harriet E. Synovec created this Life Tributes page to make it easy to share your memories.

Funeral service for Harriet will be 2:00 p.m. Wednesday, November...

Send flowers to the Synovec family.