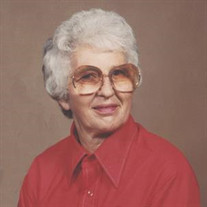 Funeral services for Hazel will be 10:30 a.m. Thursday, January 26, 2017 at the St. John's Lutheran Church in Ohiowa, Nebraska. Pastors Judy Nuss & James Sells will be officiating the services. Burial will follow the funeral and be held in the Ohiowa Public Cemetery. Visitation will be Wednesday, January 25, 2016 from 2:00 p.m. to 8:00 p.m. with the family present from 2:00 p.m. to 8:00 p.m. at the Farmer & Son Funeral Home in Geneva. Memorials are suggested to the family for future designation. Hazel Marie (Denzin) Bornschlegl was born on April 24, 1925 to Fred and Lydia (Schrock) Denzin in Alexandria, Nebraska. She passed away on January 20, 2017 at Fairview Manor in Fairmont, Nebraska at the age of 91 years, 8 months, and 26 days. Hazel was the youngest of five children in the family. Hazel attended school in Tobias, Nebraska, as well as, Carleton, Nebraska, where she graduated high school from in 1942. After high school her family moved to Clay Center, Nebraska, and her father worked at Hastings Ammunition Depot. Her family moved to Fairmont, Nebraska where she helped her parents run the café and filling station. Hazel eventually went to work as a telephone operator in Bruning, Nebraska and Carleton, Nebraska. Hazel was baptized on December 13, 1941 at Brethren Lutheran Church in Carleton. She was confirmed by Pastor Cronek on June 23, 1943 at Trinity Lutheran Church in Bruning. On September 15, 1946 Hazel was united in marriage to Weldon Bornschlegl. In 1947, they moved to the home place, and to them three children were born, Gaylene, Dennis, and Karlene. They lived on the farm until 1980 when they retired and moved to town. In 2010 they received the Nebraska Pioneer Family award for the farm being in the family for 100 years. She was a member of St. John’s Lutheran Church. Hazel enjoyed crocheting, and she crocheted approximately 60 afghans and tablecloths for her children, grandchildren, and great grandchildren. She loved spending time with family and receiving visits from friends. Hazel loved to walk and logged numerous miles in and around Ohiowa. She also enjoyed tending to her flowers and garden, going to garage sales, auctions, playing cards, and watching game shows and soap operas. She had a wonderful sense of humor that will be missed by her family and friends. Hazel was preceded in death by her husband Weldon Bornschlegl; parents Fred and Lydia (Schrock) Denzin; brother, Dale Denzin and wife Gladys; sister Evelyn (Denzin) Bauer and husband, Roland; sister Ida (Denzin) Bauer and husband, Woland; sister, Edna (Denzin) Molthan and husband Orland; sister-in-law, LaVerne (Bornschlegl) Schelbitzki and husband, Joe; and son-in-law, Cecil Gaston. She is survived by daughter, Gaylene Gaston of Tobias, NE; son, Dennis Bornschlegl and his wife Carol of Lincoln, NE; daughter, Karlene Sharp of Lincoln, NE; grandchildren, Chad Gaston and his wife Kimberly of Geneva, NE; Jacob Bornschlegl of Manhattan, KS; Jennie Guill and fiancé Brian Vana of Lincoln, NE; Justin Guill and his wife Megan of Lincoln, NE; Jera Guill of Lincoln, NE; great-grandchildren; Jayda, Kelsi, and Roman Gaston of Geneva, NE; Madison and Maya Guill of Lincoln, NE; Finley Guill of Lincoln, NE; and numerous nieces, nephews, cousins, and friends.

Funeral services for Hazel will be 10:30 a.m. Thursday, January 26, 2017 at the St. John's Lutheran Church in Ohiowa, Nebraska. Pastors Judy Nuss & James Sells will be officiating the services. Burial will follow the funeral and be held in... View Obituary & Service Information

The family of Hazel M. Bornschlegl created this Life Tributes page to make it easy to share your memories.