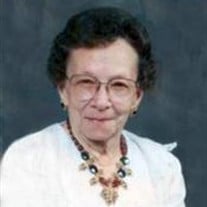 Hazel K. Hansen was born to Frank Kriley, Jr. and Eva (Griffith) Kriley on June 5, 1921 at Stockton, KS, and passed away September 17, 2011 at Geneva, NE, at the age of 90 years, 3 months and 10 days. She lived in Stockton, KS and a child and graduated from high school in 1939 at Agra, KS. She married Wayne E. Dubois on October 31, 1940 at Mankato, KS. Three children were born to this union. They are Fauna Tatro, of Geneva, NE, Vernon Dubois, of Hastings, NE, and Nancy Dynneson, of Palmyra, NE. She married Willie C. Hansen in 1970 and the couple resided in Geneva. Hazel was an avid crocheter and seamstress. She sewed and altered clothing for many people in the area. She enjoyed being with family and friends and was always busy with some project or another. Hazel was the oldest of six children. Her siblings include: brothers, Roy Kriley, of Mississippi, Carl and Cora Kriley, of Texas, Earl Kriley and Leo Kriley, of Arizona and sister, Le’, of Kansas. She was preceded in death by her parents, her husband, W. C. Hansen, one brother, Leo Kriley, and a son-in-law, Del Tatro, of Geneva. Hazel is survived by daughter, Fauna Tatro, of Geneva, daughter and son-in-law, Nancy and Harold Dynneson, of Palmyra and son and daughter-in-law, Vernon Dubois and Pat, of Hastings. She is also survived by 5 grandchildren and 16 great-grandchildren. Funeral services for Hazel will be held at the Farmer & Son Funeral Home in Geneva, Nebraska on Tuesday, September 20, 2011 at 10:00 a.m.. Interment will be in the Geneva Public Cemetery. Public visitation will begin Monday at 1:00 p.m. until 8:00 p.m. at the Funeral Home in Geneva. Memorials are directed to the family.

The family of Hazel K Hansen created this Life Tributes page to make it easy to share your memories.

Send flowers to the Hansen family.