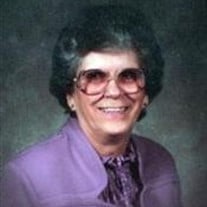 Helen Lydia Riel was born on February 16, 1923, to John and Anna C. (Tobiassen) Riel on the family farm south of Grafton. She passed away on October 4, 2013 at Heritage Crossings in Geneva, Nebraska, at the age of 90 years, 7 months and 18 days. She was the youngest of four children. Helen was baptized on April 15, 1923, by Pastor Weitzke at St. Paul’s Lutheran Church south of Grafton. She was confirmed June 21, 1936 by Pastor Vollmer. Helen attended District 74 country school for eight years. After graduating from Geneva High School with the class of 1940, she went to work as a housekeeper for the Walton family in Geneva. She later learned to do the sewing for their furrier business. Helen worked sewing furs for the Walton’s for 34 years and also did work for Steven’s Furs of McCook, Nebraska. Helen married Harold Everts on January 5, 1974. She became a farm wife and they farmed together for 15 years at the farm south and west of Grafton. After Harold’s retirement in 1988, they moved to a home in Geneva, where they lived for 22 years before moving to Heritage Crossings Assisted Living in 2009. Helen was an active member of Trinity Lutheran Church in Grafton and Grace Lutheran Church in Geneva, where she taught Sunday School for many years. She enjoyed making fur bears, sending them and delivering them to customers all over the United States. Helen and Herald also enjoyed many years of traveling together. Helen was preceded in death by her parents; brothers Bernard and Arthur; sister-in-law Phyllis Riel; brothers-in-law Don Hartmann and Walt Hartmann; special friend Gayle Walton Fuller; and husband Harold Everts. Helen is survived by sister Doris (Rex) Philippi of Bruning; three step children: Ronald Everts of York, Gloria (Jim) Walker of Omaha, Carol Everts of York; two grandchildren: Anne (Colby) Mathews of Lee’s Summit, Missouri, Matthew Walker of Omaha; three great-grandchildren Max, Oliver and Ella of Lee’s Summit; nieces Paula Henry of Fairbury, Susan (Russ) Rippe of Milford, Mary (Bernie) Johnson of Colorado Springs; nephews John (Joan) Riel of Geneva and Kurt (Kathleen) Philippi of Bruning; as well as many great nieces and nephews. Funeral Services for Helen were held on Monday, October 7, 2013 at 10:30 a.m. at the Grace Lutheran Church in Geneva. Pastor Stephen Kruschel officiated the service. Cherie Domeier accompanied the congregation in the singing of “Let Me Be Thine Forever,” “Abide With Me,” “Heaven Is My Home,” and “Amazing Grace.” Pallbearers for the service included Matt Walker, John Riel, Kurt Philippi, Russ Rippe, John Workentine, and Aaron Dressel. Interment was held in the Grafton Cemetery. Farmer & Son Funeral was in charge of the arrangements. Memorials are directed to the Grace Lutheran Church.

Helen Lydia Riel was born on February 16, 1923, to John and Anna C. (Tobiassen) Riel on the family farm south of Grafton. She passed away on October 4, 2013 at Heritage Crossings in Geneva, Nebraska, at the age of 90 years, 7 months and 18... View Obituary & Service Information

The family of Helen L. Everts created this Life Tributes page to make it easy to share your memories.

Send flowers to the Everts family.