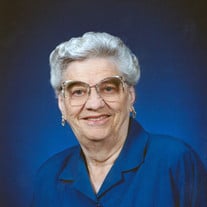 Memorial Graveside Services for Helen will be held on Friday, March 17, 2017 at 11:00 a.m. at the Davenport Cemetery in rural Davenport, Nebraska with Pastor Mark Crates officiating. No visitation - cremation. In Lieu of Flowers - memorials are to be directed to the family for a later designation. Burial of Ashes in the Davenport Cemetery in rural Davenport, Nebraska. Helen May (Lichty) (Cox) Holroyd was born to David E. and Isabel (Brammeier) Lichty on September 28, 1921 at Carleton, Nebraska, and she passed away on March 9, 2017 at Heritage Crossings in Geneva, Nebraska at the age of 95 years. She was one of 4 children in the family. Helen spent her early years in Carleton, Nebraska until the family moved to the Edgar, Nebraska area where she went to school and graduated from the Edgar High School with the class of 1938. After high school, she moved to a ranch outside Pine Bluffs, Wyoming to keep house for her brother Don and uncle Merle Brammeier. It was here she met Howard Cox. They were married December 21, 1940. They first made their home in Bushnell, Nebraska until Howard joined the Navy in 1941. While Howard was in the Navy, Helen moved back to Grand Island, Nebraska to stay with her sister and brother-in-law and she worked at the Naval Ordinance Plant until Howard returned from the South Pacific. When Howard returned, the family moved back to Bushnell where their son, Doug, was born. They then moved to Los Alamos, New Mexico where Howard worked for the ZIA Company, a government contractor that handled logistics for the nuclear program. The family moved to Davenport, Nebraska in 1953 and Howard started farming. They remained on the farm until 1968 when Howard had to retire due to health reasons. They bought a house in Geneva, Nebraska and Howard passed away in 1971 from complications due to heart surgery. Helen met Ray Holroyd in 1973 and they were soon married. They shared their life for 31 happy years. Helen enjoyed horseback riding in her younger years, traveling, quilting, card playing, and spending time with friends and relatives. She especially enjoyed telephone conversations with her granddaughter, Bethany, and visits from her 2-year-old great nephew Emmitt. Helen was a member of the United Methodist Church and the American Legion Auxiliary. She was preceded in death by her parents David and Isabel Lichty; her first husband Howard Cox; her second husband Ray Holroyd; sister and brother-in-law Evelyn and Myron Carlson; brother and sister-in-law Don and Lois Lichty; and sister Ester Lichty. She is survived by her son Doug Cox of Geneva, Nebraska; granddaughter Bethany Cox of Lenox, Massachusetts; step-sons Dwain and Eldon Holroyd and step-daughter Carolyn Brennfoerder; many step granddaughters and step grandsons and nieces and nephews.

Memorial Graveside Services for Helen will be held on Friday, March 17, 2017 at 11:00 a.m. at the Davenport Cemetery in rural Davenport, Nebraska with Pastor Mark Crates officiating. No visitation - cremation. In Lieu of Flowers - memorials... View Obituary & Service Information

The family of Helen M. (Lichty) (Cox) Holroyd created this Life Tributes page to make it easy to share your memories.

Memorial Graveside Services for Helen will be held on Friday,...

Send flowers to the Holroyd family.