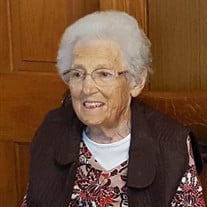 Funeral services for Helen will be held on Tuesday, December 15, 2015 at 10:00 a.m. at the Zion Lutheran Church in Shickley, Nebraska. Pastor James Moll will officiate the services. Following the funeral, there will be a graveside service... View Obituary & Service Information

The family of Helen L. Koch created this Life Tributes page to make it easy to share your memories.

Funeral services for Helen will be held on Tuesday, December...

Send flowers to the Koch family.