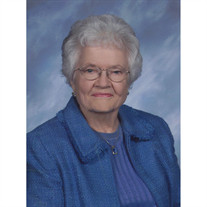 Helen Nadine Nunns was the oldest child of Bertha (Brower) and John Larson. She was born in Geneva, Nebraska, June 8, 1917 and lived in and around Geneva her entire life. She attended country school with her brother, Port, and sister, Shirley, and graduated from Geneva High School with the class of 1934. During high school, she took a class called Normal Training which allowed her to teach school for 3 years. She taught through eighth grade in a one-room country school in Fillmore County and later worked at the Penney’s Store in Geneva. Helen was active in 4-H, first as a member and then as a leader. In 1935 she claimed the title of “Nebraska 4-H Health Champion” which won her a trip to Chicago. It was a memorable and exciting experience for her. Helen met her husband, Robert, at a dance at the Fillmore County Fair. She remembered sitting on a bench with about a dozen other girls. She noticed Robert looking at each one until he finally walked over and stopped in front of her. She accepted his invitation to dance and the rest, as they say, is history. They started their married life in February of 1941 on a farm southeast of Geneva. Their family increased to four with the births of Shirley and Bob. In 1983 they retired and moved into Geneva. Robert died in 1986 after suffering a stroke 2 years earlier. Helen’s devoted care and faithful companionship spoke of her love for him to all who knew them. They enjoyed 45 years of marriage. Helen was a member of long standing in the United Church of Christ in Geneva, where she taught young children in Sunday School for many years. She belonged to the Women’s Fellowship and was a fifty-year member of the Chelsea Women’s Club. She was a shameless Big Red fan and could be counted on knowing what yard line the ball was on. Her biggest interest by far was playing cards, especially bridge. Someone once said, “I wouldn’t mind going to jail if I had 3 cellmates who played bridge.” This described her exactly. She organized pitch and bridge games at the Senior Center, and she loved playing games with her children, their spouses, grandchildren, and her great grandchildren. The competition was heated and no one was shown any mercy! For those who knew her, her positive attitude and her gentle spirit made it easy to believe that she just might keep on going forever. Her upbeat outlook came from her faith in God and also being interested in other people. She enjoyed meeting new people who moved to the community and helping them become acquainted with everything Geneva offered. Her family will miss her sage advice, her listening ear, her interest in their lives, and her calming and helpful presence. She was gentle, gracious, loving, kind and patient…..and loved to play cards. Preceding her in death were her husband Robert, one brother and one sister. Left to cherish her memory are daughter Shirley and husband Larry Bornschlegl; son Bob Nunns and wife Linda; grandchildren Stephanie and husband Kevin Eubanks, Matthew Bornschlegl and wife Staci, Robb Nunns and wife Megan, Al Gibbs and wife Angie; great grandchildren Becton Eubanks, Joshua, Alli, and Emma Bornschlegl, Ashton and Aspen Gibbs; sisters-in-law Lucy Pollock and Doris Willadsen; nieces, nephews and cousins. Funeral services for Helen were held on Monday, August 17, 2015 at 10:30 a.m. at the First Congregational United Church of Christ. Pastor Diane Ryder officiated the services. Nancy Cradduck accompanied the congregation in the singing of “Amazing Grace” and “Jesus Loves Me.” Pallbearers for the service included Matt Bornschlegl, Robb Nunns, Al Gibbs, Dale Nunns, Keith Nunns, and T.J. Robinson. Interment was held in the Geneva Public Cemetery following the funeral service. Memorials are directed to the Geneva Senior Center or the United Church of Christ. Farmer & Son Funeral Home conducted the services. Condolences may be left at www.farmerandsonfuneralhome.com.

Helen Nadine Nunns was the oldest child of Bertha (Brower) and John Larson. She was born in Geneva, Nebraska, June 8, 1917 and lived in and around Geneva her entire life. She attended country school with her brother, Port, and sister, Shirley,... View Obituary & Service Information

The family of Helen N. Nunns created this Life Tributes page to make it easy to share your memories.

Helen Nadine Nunns was the oldest child of Bertha (Brower) and...

Send flowers to the Nunns family.