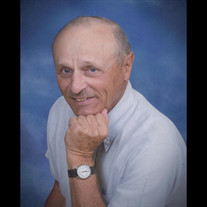 A Funeral Mass for Henry will be held on Tuesday, April 4, 2017 at 2:00 p.m. at St. Joseph's Catholic Church in Geneva. A Rosary will be prayed prior to the service at 1:00 p.m. at St. Joseph's Catholic Church. Father Scott Courtney will officiate the services. Burial will be held in the Atlanta Cemetery following the Funeral Mass. Visitation will be held Monday from 1:00 p.m. to 8:00 p.m. with family present from 6:00 p.m. to 8:00 p.m. at Farmer & Son Funeral Home in Geneva. Memorials are suggested to the family for a later designation. Henry Rogene Kral was born to Henry William Kral and Agnes Emily (Cecrle) Kral on December 14, 1939 at Tobias, Nebraska and passed away March 28, 2017 at Bryan Health East Campus in Lincoln, Nebraska at the age of 77 years 3 months and 14 days. He was one of 4 children in the family. Henry graduated from Milligan High School in 1957. Throughout his life he lived in Tobias, Nebraska, Sulphur, Louisiana and Geneva, Nebraska. Henry was employed at the Nebraska Department of Roads from July 1, 1974 until his passing on March 28, 2017. He enjoyed his job and worked as a Highway Maintenance Worker/Sr. for 42 years and 8 months. He loved spending time with his family and enjoyed surprising them with spur of the moment visits. Throughout his life he enjoyed playing card games, especially with his co-workers at the Nebraska Department of Roads. His parents, Henry & Agnes Kral, Geneva, NE and his sister, Delores Vincent, Sulphur, LA preceded him in death. He is survived by his sisters, Ruth Ellen Vincent, Sulphur, LA and Margaret (Vernon) Dey, Gresham, NE; nieces, Deb (Pete) Eisenbarth of Roca, NE, Denise (Bill) Traylor of Denham Springs, LA, Anne Martin of DeQuincy, LA, Janet Bertrand of Sulphur, LA, Margaret Vincent of Sulphur, LA, Judith Perry of Sulphur, LA; nephews, Roger (Diana) Vincent of Sulphur, LA, Ralph Vincent of Sulphur, LA, James Vincent of Sulphur, LA, Phillip Vincent of Sulphur, LA, and David Dey (Diane) of Gresham, NE. He is also survived by Aunt Rose Marie Cecrle of Daykin, NE and a host of cousins.

The family of Henry Kral created this Life Tributes page to make it easy to share your memories.

Send flowers to the Kral family.