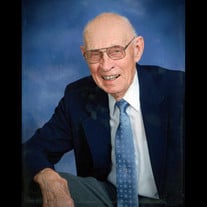 Memorial services for Herm will be held on Tuesday, August 16, 2016 at 10:30 a.m. at the United Methodist Church in Geneva. Pastor Michelle Gowin will officiate the services. The public is invited to a family greeting time from 5:00 p.m. to 7:00 p.m. Monday at the Fussell Felllowship Hall in Geneva. Memorials are directed to the family for future designation. On Friday afternoon, August 12, 2016, with his family by his side, Herman Lyle Larsen left this earth to make his journey to Heaven. His story began on January 3, 1922, when he was born to proud parents Lars C. and Anna M. (Sorensen) Larsen on the family homestead near Marquette in Hamilton County, Nebraska. He joined twin sisters, Vera and Vivian, who were born 4 years earlier. Growing up on the family farm, Herman had several daily chores, including milking the cows, feeding the chickens and pigs, and washing dishes for his beloved Mother who was often ill. After his sisters left home, he was always helping his Mother with anything she needed. He quite often rode his horse to the small country school he and his sisters attended from kindergarten through the 8th grade. He then went to high school in the “big city” of Marquette. While in high school, he was active in baseball, basketball, track, and he was the only trumpet player in the 12-person band. He graduated in 1939 and started his studies at the University of Nebraska. After World War II began, he was drafted in to the Army’s 24th Infantry in October of 1942. He said he was “scared and frightened and we knew Japan, Italy and Germany were trying to take over the world.” He had 6 months of basic training in Hawaii, and then he spent the next 3.5 years in the Pacific Theater where he attained the rank of Sergeant. During this time, his division destroyed countless Japanese airbases and shipping ports, and then Herm also took part in several covert operations where they gathered information on the Japanese. His infantry suffered 7012 fatalities, the fifth most in the Pacific. He would recall, “We had a job to do, and we had to get it done. Shots were fired and lives were taken and it was never fun to say that your friends can vanish in the blink of an eye.” A bright spot was that he was selected to play in his division’s 100-member band. After returning home from the service, Herm continued his studies at the University of Nebraska where he was a member of the marching band. He received a degree in music education. A few years later he completed his Master’s Degree. On September 9, 1950 he married the love of his life, Elizabeth (Liz) Margaret Mason of Seward, Nebraska. In May of 1952, their first daughter, Suzanne, was born, and in July of 1956 they were blessed with their second daughter, Patricia (Pat). In 1951, Herm and Liz moved to Geneva and Herm began teaching instrumental music (grades 5-12) and boys’ glee at Geneva High School. He loved teaching the kids, and he touched many lives over the years. After retiring from teaching in 1970, he became an Associate Judge for Fillmore County. Herm directed choir at the United Methodist Church for 30 years, and he sang in the choir up until about a year ago. After Herm and Liz both retired, they thoroughly enjoyed having more time to see their grandchildren who were the light of their lives, dance to big band music at the Flying V in Utica, golf, get together with friends and travel. Well into their 80’s, Herm and Liz also delivered Meals On Wheels to the “old folks.” Herm lost Liz on April 28, 2012, and he valiantly carried on for the next 4 years and 4 months. Herm leaves a wonderful legacy of love, kindness, and laughter. He was a staple in the community of Geneva for many decades not knowing a stranger young or old, and he always greeted you with a smile and a laugh. Everyone looked up to and out for Herm. He’s most likely making the angels smile (and probably blush) with his jokes and humor. Herm was preceded in death by his parents; beloved wife Liz; and sisters Vera and Vivian. He is survived by his daughters and sons-in-law Suzanne & Jesse Sherwood of Stilwell, Kansas and Patricia & Chris Huston of Central City, Nebraska; and grandchildren Aaron, Chelsea, and Daniel Huston.

Memorial services for Herm will be held on Tuesday, August 16, 2016 at 10:30 a.m. at the United Methodist Church in Geneva. Pastor Michelle Gowin will officiate the services. The public is invited to a family greeting time from 5:00 p.m.... View Obituary & Service Information

The family of Herman L. Larsen created this Life Tributes page to make it easy to share your memories.

Memorial services for Herm will be held on Tuesday, August 16,...