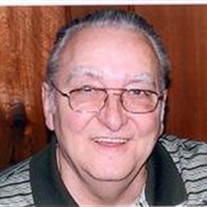 Herman Lee Nagy was born to Alex Nagy, Sr. and Bertha (Judd) Nagy on August 8, 1942, at Logan, West Virginia, and passed away on June 6, 2011, at Clarkson Hospital in Omaha, Nebraska at the age of 68 years, 9 months, and 28 days. He was one of 2 children. Herman graduated from Logan High School in 1961. He entered the United States Air Force in August of 1961 for a career spanning 27 years. He retired in September 1988 as a Senior Master Sergeant in the Air Force. He worked as a mechanic on B-52 bombers. After retirement, he worked as a modular home inspector for Redman Homes. In 2001, he moved to Shickley, Nebraska. He was also an avid computer technician. Herman married Sandra Schafer of Shickley, Nebraska on July 16, 2005. Herman was a member of the St. Mary’s Catholic Church in Shickley. He was also a member of the Knights of Columbus, and currently served as Grand Knight. In his spare time, Herman was an avid bowler. He enjoyed helping young boys & girls learn the art of bowling. Herman was preceded in death by his parents Alex and Bertha and by his brother Alex. He is survived by his wife Sandra Nagy of Shickley, NE; Son Chris & wife Sherie Nagy of Edgewater Park, NJ; Daughters Deborah & husband Bob Brooks of Chesapeake, VA, Deirdre Lawrence of North Carolina, Susie & husband Jon Budine of Nutley, NJ, Charissa & husband Orlando Ortiz of Lancaster, PA; Stepson Jason & wife Trish Schafer of Easton, PA; Stepdaughter Kristine & husband Brad Benson of McPherson, KS; Grandchildren: Jennifer Fagner, Dennis Roberts, Heather Baker, Christina Nagy, Emily Budine, Andrew Budine; Step-Grandchildren Jacob, Katie, and Makenzie Benson, Zachary and Reghan Schafer; 5 great grandchildren, and a host of many very special friends. . A Funeral Mass for Herman was held on Thursday, June 9th, 2011 at 10:30 a.m. at the St. Mary’s Catholic Church in Shickley, NE with Father Tom Walsh officiating. Carol Grote accompanied the congregation in the singing of “How Great Thou Art, “ “On Eagles’ Wings,” “Prayer Of St. Francis,” and “Battle Hymn Of The Republic,” Pallbearers for the service were the Offutt Air Force Base Military Honor Guard. Interment was held in the St. Mary’s Catholic Cemetery, rural Shickley. Memorials are directed to the family, the Wounded Warriors Charity, or the Operation Gratitude Charity. Farmer & Son Funeral Home was in charge of arrangements.

The family of Herman L. Nagy created this Life Tributes page to make it easy to share your memories.

Send flowers to the Nagy family.