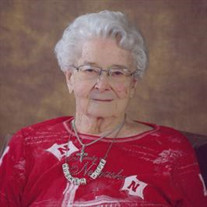 Funeral Mass for Hope will be 10:30 a.m. Tuesday, September 27, 2016 at St. Joseph's Catholic Church in Geneva, Nebraska. Rosary will be 7:30 p.m. Monday Evening at the Church. Visitation will be 1 hour prior to the Rosary Monday and 1 hour prior to the Funeral Mass on Tuesday. Burial will be in the St. Joseph's Catholic Cemetery. Memorials are directed to the family for later designation in lieu of flowers. Hope Lorraine Hampton Weaver died Thursday September 22, 2016, at the age of 91 in Lincoln, Nebraska. Hope was born in Chadron, NE on April 25, 1925, the daughter of Florence Mildred Naylor Hampton and Walter John Hampton. Hope was proceeded in death by her parents and husband of 43 years, Leslie K. Weaver, who died June 4, 1994. Hope spent her childhood in Chadron, NE. She graduated from Chadron Prep High School in 1942 as Valedictorian. She continued her education at Chadron State Teachers College majoring in Education. She was honored as First Scholar in her graduating class. After graduation, she began her teaching career at Ogallala and Chadron High Schools. On June 21, 1950 Hope married the love of her life, Leslie K. Weaver. From this union, they had three children, Kathy, Bill, and Diane. Together they were educators in public education in Kansas and Nebraska until their retirement. Throughout her career, Hope fulfilled many different educational roles including Home Economics, History, Librarian and Primary, Secondary Education and Media Director of ESU #8. Hope ended her career as Staff Development Director of ESU #8 , Neligh, Nebraska Hope was very involved and served many professional organizations: Delta Kappa Gamma, NEMA, NSEA and NSEA-Retired,. She served on many local and state boards in these organizations. There was no more loyal or optimistic sports fan than Hope for her family and Nebraska Cornhuskers. Close friends nicknamed her “Husker Hope”. She was proud of her active and loyal commitment to the Democratic Party. Hope took great pride and her ever-widening circle of friends, including those kind and supportive friends at the Legacy in her later years of life. She especially connected with the staff and servers at the Legacy Retirement Community. All fondly referred her to as “Grandma Hope”. She will be truly be missed. Hope is survived by a son, William Dean and wife, Carol, of Geneva, NE; two daughters, Kathy Sue and husband, John Halpin of Overland Park, KS, and Diane Marie and husband, Victor Jacobson, of Hebron, NE. She is survived by seven grandchildren and nine great-grand children. She is survived by two brothers, Robert Hampton of Omaha, NE, and James Hampton and wife Shirlee of Northport, MI.

Funeral Mass for Hope will be 10:30 a.m. Tuesday, September 27, 2016 at St. Joseph's Catholic Church in Geneva, Nebraska. Rosary will be 7:30 p.m. Monday Evening at the Church. Visitation will be 1 hour prior to the Rosary Monday and 1 hour... View Obituary & Service Information

The family of Hope L. Weaver created this Life Tributes page to make it easy to share your memories.

Send flowers to the Weaver family.